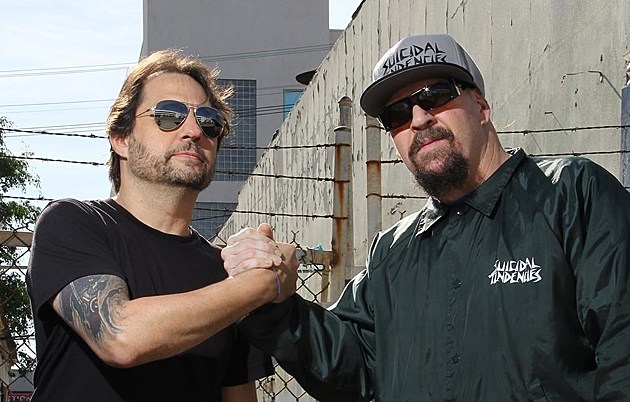 Former Slayer drummer Dave Lombardo's band Philm is no more and he's been prepping his new punk band Dead Cross with Justin Pearson of The Locust, Retox, Head Wound CIty and more. Meanwhile, he's got another exciting project coming up.

He'll sit behind the kit for fellow thrash vets Suicidal Tendencies, who toured not long ago with the Dave Lombardo-less Slayer, on their upcoming tour. Suicidal's upcoming tour, as you may know, is opening for Megadeth with support from Children of Bodom and Havok. It hits NYC on March 16 and 17 at Terminal 5. Tickets for those shows are still available. All dates are listed below.

The Dave Lombardo-less Slayer just began a tour with Testament and Carcass. Check out pictures from Chicago.

This upcoming tour of course won't be the first time Megadeth and Suicidal Tendencies tour together. They hit the road in 1992, which Headbangers Ball showed up for. Watch an old video of that (with former host Riki Rachtman) below...