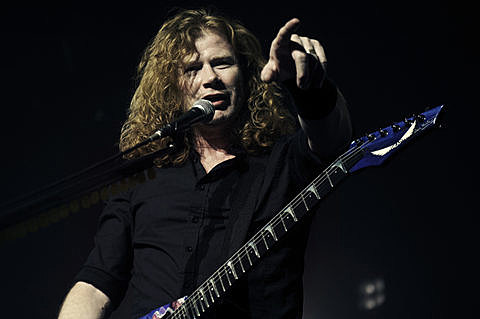 Megadeth is currently on the road with Motorhead as part of Gigantour. The show came to The Theater at Madison Square Garden in NYC, and even more recently to the Aragon Ballroom in Chicago. Right before that they stopped in Canada and that's where MusicRadar caught up with frontman Dave Mustaine. Here's part of their chat:

Speaking of news, you were a correspondent for MTV during the 1992 presidential election. What's your take on US politics in 2012?

Dave: "I'm just hoping that whatever is in the White House next year is a Republican. I can't bear to watch what's happened to our great country. Everybody's got their head in the sand. Everybody in the industry is like, 'Oh, Obama's doing such a great job...' I don't think so. Not from what I see.

"Looking at the Republican candidates, I've got to tell you, I was floored the other day to see that Mitt Romney's five boys have a $100 million trust fund. Where does a guy make that much money? So there's some questions there. And watching Newt Gingrich, I was pretty excited for a while, but now he's just gone back to being that person that everybody said he was - that angry little man. I still like him, but I don't think I'd vote for him.

"Ron Paul... you know, I heard somebody say he was like insecticide - 98 percent of it's inert gases, but it's the two percent that's left that will kill you. What that means is that he'll make total sense for a while, and then he'll say something so way out that it negates everything else. I like the guy because he knows how to excite the youth of America and fill them in on some things. But when he says that we're like the Taliban... I'm sorry, Congressman Paul, but I'm nothing like the Taliban.

"Earlier in the election, I was completely oblivious as to who Rick Santorum was, but when the dude went home to be with his daughter when she was sick, that was very commendable. Also, just watching how he hasn't gotten into doing these horrible, horrible attack ads like Mitt Romney's done against Newt Gingrich, and then the volume at which Newt has gone back at Romney... You know, I think Santorum has some presidential qualities, and I'm hoping that if it does come down to it, we'll see a Republican in the White House... and that it's Rick Santorum."

Good thing there was no Megadeth in Obama's Spotify playlist which contains some of what you would expect like Wilco, Bruce Springsteen and Arcade Fire, and at least one "whoah!" aka a fairly small band from Portland who are signed to Knitting Factory Records and that is AgesandAges. Congrats to them! (though of course it should be noted that, to be more specific, the Spotify playlist "features picks by the campaign staff--including a few of President Obama's favorites." Check out the whole thing on Spotify.