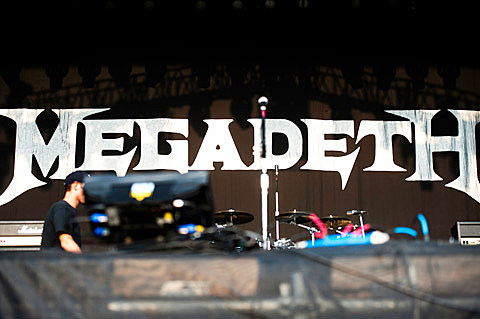 It's been a bizarre and sad week for Megadeth. It was confirmed today that remains found Wednesday in California are those of Megadeth frontman Dave Mustaine's missing mother-in-law...

Authorities say an autopsy to determine how she died is pending, but foul play is not suspected.

Sally Estabrook, 75, was last seen Oct. 4 at the Pinezanita RV Park and Campground in Julian, about 60 miles northeast of San Diego. Estabrook, who suffers from Alzheimer's disease, was reportedly camping with friends when she vanished.

The veteran metal band's long list of lineup changes added another pair of entries [this week], with drummer Shawn Drover and guitarist Chris Broderick both separately announcing their departures. As Loudwire reports, Drover made headlines with his exit first, issuing a statement reading, "After 10 years, I have decided to quit Megadeth to pursue my own musical interests. I want to thank Dave Mustaine and the entire Megadeth family, as well as thanking all the amazing Megadeth fans around the world!!! I truly appreciate all of you. Stay tuned for info on my next musical journey."

Hours later, Broderick posted his own announcement at his official site, writing, "Due to artistic and musical differences, it is with great reluctance that I announce my departure from Megadeth to pursue my own musical direction. I want all of you to know how much I appreciate the amount that you the fans have accepted and respected me as a member of Megadeth for the last seven years, but it is time for me to move on. I wish Dave and everyone in Megadeth all the best. I am working on a few things of my own and hope that when they come out, you will all dig it."

Shawn's brother Glen also used to play in Megadeth as guitarist, and he tells Blabbermouth "There Is NO Chance" I Would Ever Rejoin MEGADETH.

Megadeth was recently named the 7th best metal band of all time in a MetalSucks poll.