photo by by Ryan Russell 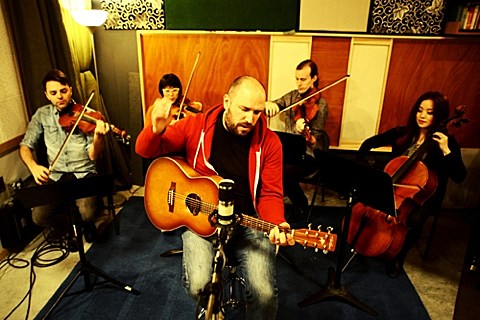 Last we heard from Pedro the Lion/Headphones frontman David Bazan, he was touring PtL's album Control in full, and then as a part of the "supergroup" Overseas. Now he's teamed up with modern classical group The Passenger String Quartet for a collaborative album which will be out later this year. Here's the details:

The seed for this album was planted during a one-off show back in 2012. Bazan was invited to play a show in Tacoma WA with the Passenger String Quartet. PSQ leader Andrew Joslyn put together string arrangements for 4 songs and it was an enjoyable evening for all. They immediately began talking about doing it again and eventually started talking about making proper studio recordings of these songs. But it took nearly two years for everyone's schedules to line up again. In February 2014, they were able to spend a week at Avast! studio in Seattle tracking a collection of 10 songs pulled from Pedro The Lion, Headphones and Bazan solo albums. Long time friend and collaborator Chris Colbert recorded, mixed and mastered the album. Chris's no nonsense approach and years of friendship with Bazan helped focus the effort and they were able to record the entire album in just a few days.

David and the Passenger String Quartet are also planning a tour together, and though that hasn't been announced in full yet, a few shows have popped up including the NYC date happening on November 1 at Bowery Ballroom. Tickets for that show go on sale Friday (6/13) at noon with an AmEx presale starting Wednesday (6/11) at noon.

All currently known dates are listed, with live videos of David & Passenger String Quartet playing four of the album's tracks at their 2012 Tacoma, WA show, and a full album stream, below...

Before that, David also goes on a living room tour...