tributes outside of Bowie's SoHo apartment (via @natebui) 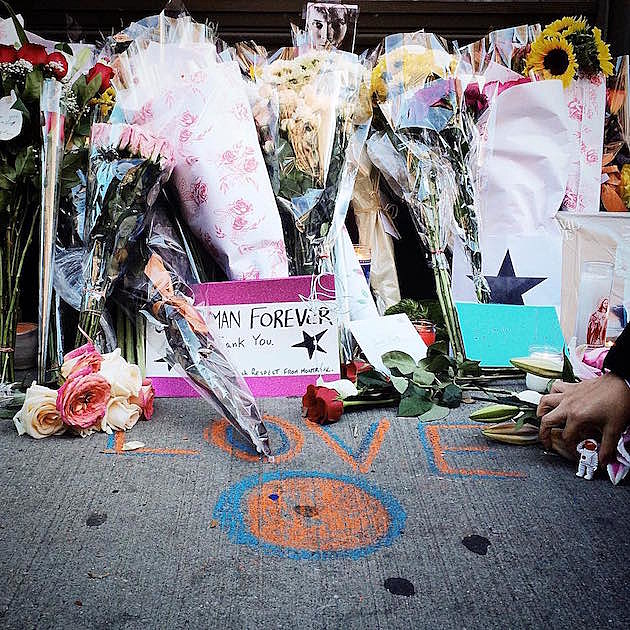 The world is still reeling from the news of David Bowie's death, just two days after his 69th birthday (and the release of his great new album, Blackstar). Here in NYC, where Bowie lived, fans have been leaving candles, flowers and other tributes outside his SoHo apartment building on Lafayette St, and there are also tributes being left outside of the East Village's New York Theatre Workshop where his musical, Lazarus, is in the middle of its sold-out run.

As mentioned, Michael Dorf's annual Carnegie Hall concert will be a tribute to Bowie and there are bound to be many more musical tributes in the weeks ahead. There's actually one tonight (1/11) at C'Mon Everybody in Brooklyn featuring Lena Hall, Stephen Trask, and Tim Mislock of Hedwig and The Angry Inch, as well as Akie Bermiss, Bridget Barkan and more. Advance tickets for this event, which has been in the planning for over a month, are sold out but there will be limited $10 tickets at the door tonight. Doors are at 7:30 PM. Flyer is below.

There is also going to be a David Bowie tribute at Manhattan Inn tonight homage to his work by Legs and SPK, also featuring Bowie celebrations by members of A Sunny Day in Glasgow, Strange Names, EMEFE, Pavo Pavo, Indigo Street, and other artists. That show is free and doors are at 8:30 PM.

Jason Lindner, who played on Blackstar, plays Nublu tonight (1/15) as part of his "Electronic Mondays" January residency. Performing with him tonight are Sasha Masakowski (vocals, electronics), Jesske Hume (bass, electronics), and Abe Seiferth (electro-beats). It's $10 at the door.

Also coming up is Disappears' performance of Bowie's 1977 album Low at Baby's All Right on February 20 which they originally performed as of part of last year's Bowie Changes exhibit at Chicago's MCA. They'll also perform a set of all-new songs and tickets are still available.

Other Bowie-related events: The "Feeling Gloomy" danceparty is hosting a special Bowie weekend: Friday (1/15) at Littlefield and Saturday and Sunday (1/16 & 1/17) at Grand Victory. There's also a Bowie edition of "12XU" at HiFi Bar on Saturday. At Bowery Electric on Sunday it's a Bowie edition of "Sally Can't Dance" with DJs Jonathan Toubin, MIss Guy, Alix Brown, plus a live performance by Bowie cover band Michael T. & the Vanities with loads of special guests (tickets)

If you need other Bowie things today to fill the void there is no shortage of stuff to watch. Bowie made a lot of television appearances in the 1970s, including more than a few visits to daytime talk shows. He chatted with Dick Cavett in 1974 (where he performed "Young Americans" and "1984"), and he and pal Iggy Pop talked punk rock with Dinah Shore in 1977. You can watch those, plus visits to Soul Train, a Cher special and more, below. 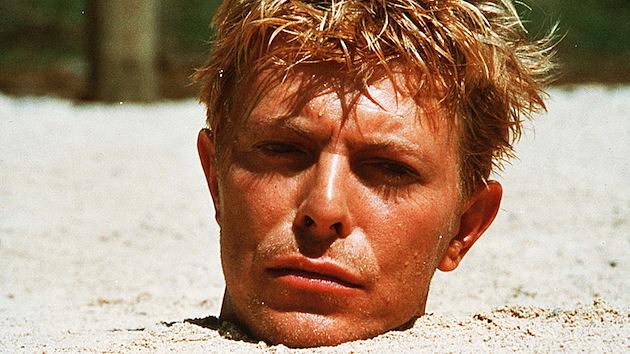 There are also Criterion Collection editions of Bowie Films The Man Who Fell to Earth and Merry Christmas Mr. Lawrence. Neither are on Criterion's Hulu page at the time, but that might change. You can see free screenings of both of those films in NYC at Lincoln Center's Walter Reade Theater on Friday (1/15) with Merry Christmas Mr Lawrence at 6:30 PM and The Man Who Fell to Earth at 9 PM.

Bowie was also great as Andy Warhol in Basquiat which is on Netflix. There's also the 1983 vampire flick The Hunger (which also stars Susan Sarandon, Catherine Deneuve and has Bauhaus performing "Bela Lugosi's Dead" in the opening credits) and is available to rent. You can also watch D.A. Pennebaker's 1973 concert film Ziggy Stardust and the Spiders from Mars below.

Videology in Williamsburg will be showing Bowie films all night tonight (1/11) in the front bar, starting with Christiane F, and that is free.

And who can forget Bowie as The Goblin King in Jim Henson's 1986 fantasy Labyrinth? It's available to rent or buy digitally. It's a little ways off but there's a 30th Anniversary tribute to Labyrinth happening at Shea Stadium on May 21. No word tickets or who will be performing but flyer for the show, and video of Bowie performing "Magic Dance" in the film, below... 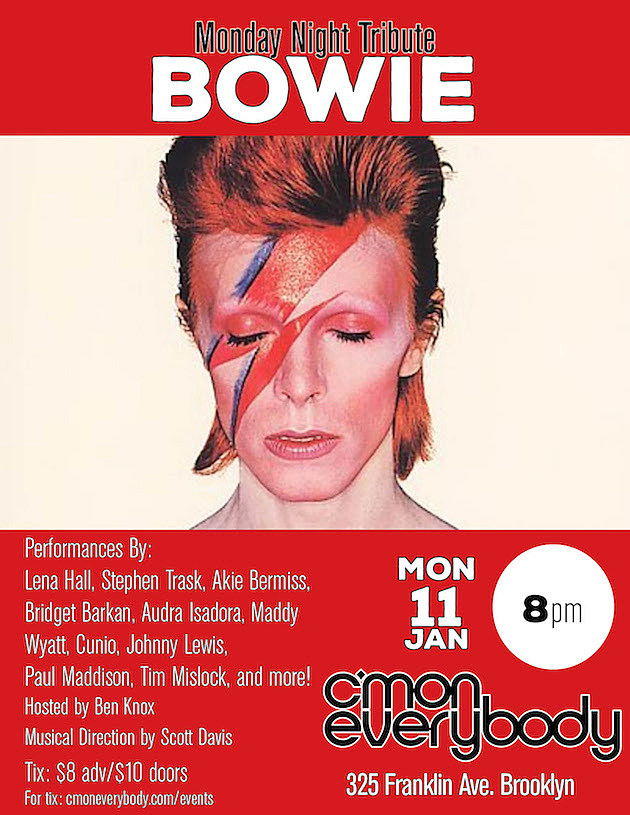 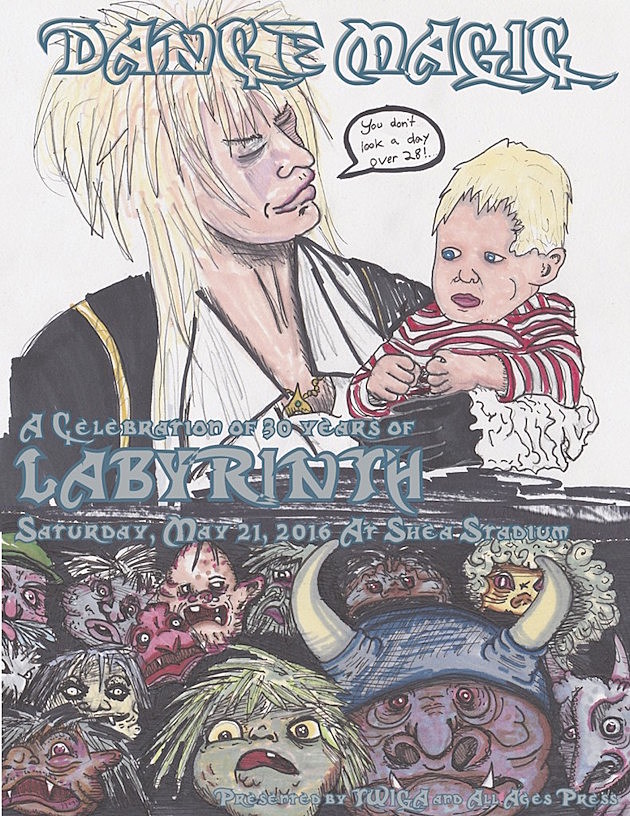