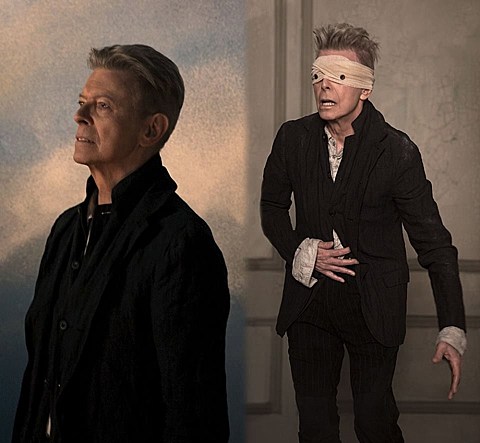 Last week, David Bowie released the really great title track off his upcoming album '★' (pronounced "Blackstar") and now a new feature on Rolling Stone reveals more details on the album. LCD Soundsystem's James Murphy, who remixed a song off his last album, plays percussion on two tracks on this one. He was going to be one of the producers at first too, but it never came to be:

LCD Soundsystem founder James Murphy plays percussion on two tracks, though his role on the album was originally going to be much more significant. "At one point we were talking about three producers for the album: David, James and myself," says Visconti. "[Murphy] was there for a brief time, but he had his own projects to go off to." Adds Guiliana, "His role was never really defined. He brought in some synths and some percussion and had a ton of ideas."

Longtime Bowie collaborator Tony Visconti also reveals that Kendrick Lamar was an influence on the record. He said, "We were listening to a lot of Kendrick Lamar. We wound up with nothing like that, but we loved the fact Kendrick was so open-minded and he didn't do a straight-up hip-hop record. He threw everything on there, and that's exactly what we wanted to do. The goal, in many, many ways, was to avoid rock & roll."

The article also reveals that he recorded the album with saxophonist Donny McCaslin's jazz quartet (featuring bassist Tim Lefebvre, drummer Mark Guiliana, and keyboardist Jason Lindner). Bowie went to see play a club in the West Village in 2014, and later that year they played with him on his single "Sue (Or In A Season Of Crime)." Jazz guitarist Ben Monder plays on a song too (album closer "I Can't Give Everything Away").

This album is sounding pretty exciting. Read more here and check out the '★' video below...