Today is the 50th anniversary of one of the greatest albums of all time, David Bowie's The Rise and Fall of Ziggy Stardust and the Spiders from Mars. For the occasion, the album is getting a 50th anniversary edition tomorrow (6/17), including a half-speed master on black vinyl and a vinyl picture disc. Click those links to pick those up while they last. Here's a mock-up of the picture disc: 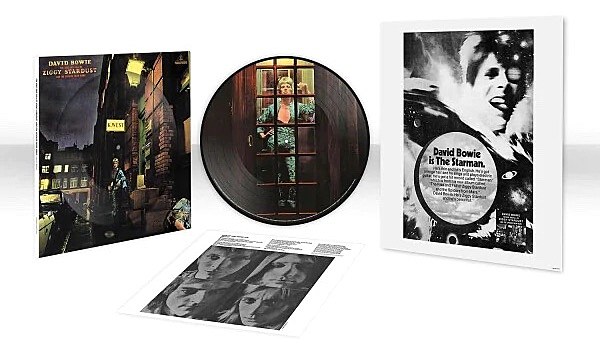 In celebration of the anniversary, Parlophone Records has also put out a previously unreleased version of "Starman," which was recorded for Top of the Pops. It takes the backing track that was recorded at Trident Studios on June 29 and backing vocals, and adds the lead vocals from the album version (recorded at Trident Studios on February 4), and it features Bowie's one-off ad-lib of "Hey Brown Cow" recorded for the show. The new mix was created by album co-producer Ken Scott. Listen below.

Bowie's various eras have influenced so many different styles of music over the years, and back in 2019, we wrote about Ziggy Stardust's impact on punk:

Bowie worked on three albums in 1972 that were crucial to the development of punk. He produced Lou Reed's solo breakthrough Transformer and The Stooges' most overtly proto-punk album Raw Power (not released until early 1973), and he recorded his own album about a fictional character named Ziggy Stardust, who was inspired by both Iggy Pop and Lou Reed. While Bowie's influence on punk is undeniable, he never came nearly as close to actually writing punk music as he probably could have, but Ziggy Stardust, with its clear Lou Reed/The Velvet Underground and Iggy Pop/The Stooges influence, was the closest he did come. I think he was probably too naturally ambitious to ever make a record as simple and stripped-down as true punk, but Ziggy Stardust did a great job of marrying that ambition to music that had more than a little in common with The Stooges and The Velvet Underground. (Punk was also of course not fully a thing yet in 1972. By the time it was, Bowie was experimenting with all different kinds of stuff.) Ziggy Stardust shared a lot of qualities with its predecessor Hunky Dory, and Hunky Dory already showed off a clear Lou Reed influence with the song "Queen Bitch," but "Queen Bitch" was just the tip of the iceberg compared to the punkness of Ziggy Stardust. From the unhinged way Bowie yell-sings at the end of album opener "Five Years" to the crunchy power chords that open "Moonage Daydream," there are some proto-punk traits on the first half of the album -- along with ballads and strings and all kinds of other stuff -- but it's really the second half of the album where things start sounding like punk as know it today. You could picture Iggy singing over the choppy power chords and fast-paced drums of "Star," and with a little more distortion, the main guitar riff in "Hang Onto Yourself" could've become a Ramones song. The title-ish track "Ziggy Stardust" may have been more of a ballad, but the attitude in the chorus predicted punk's attitude about as much as anything in 1972 could. The album's punk peak, though, is "Suffragette City." Up the distortion and lower the production value just a bit, and you'd have a song that could've fit on Raw Power. Leave it as is, and it's still pretty punk. From the shouted "hey man!"s that punctuate the lines in the verses, to Bowie's manic vocal delivery, to the song's driving pace, just about everything about "Suffragette City" predicted the punk movement that was just around the corner at the time. Bowie ends the album with "Rock 'N' Roll Suicide," and by the time he's hoarsely yelling at the song's end, it's very clear that this was the Bowie album early punk bands were taking notes from.