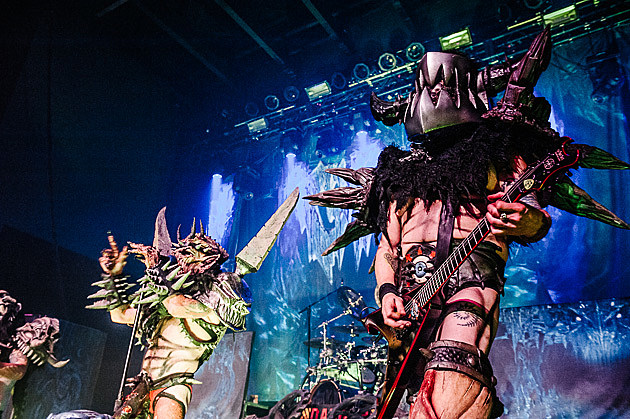 A member of the Richmond Police Department confirmed early Monday that the 50-year-old musician was found dead in his home Sunday between 3 p.m. and 7 p.m. by his roommate.

"Dave was one of the funniest, smartest, most creative and energetic persons I've known," former Gwar bassist Mike Bishop says. "He was brash sometimes, always crass, irreverent, he was hilarious in every way. But he was also deeply intelligent and interested in life, history, politics and art."

"His penchant for scatological humors belied a lucid wit. He was a criminally underrated lyricist and hard rock vocalist, one of the best, ever! A great front man, a great painter, writer, he was also a hell of a bass guitarist. I loved him. He was capable of great empathy and had a real sense of justice."

The news comes in a year the Grammy-nominated band marks its 30th anniversary and recently returned from a long-awaited first performance in Japan. It recently announced that it would hold its fifth Gwar-B-Q concert Aug. 16 at Hadad's Water Park. [Style Weekly]

David Brockie, aka Oderus Urungus, the frontman of graphic, theatrical metal band Gwar, has passed away at 50 years old. Cause of death has not been revealed, but police do not suspect foul play. You'll be missed Oderus Urungus. Thanks for all the maniacal shows over the years.

None of Gwar's or Brockie's representatives have confirmed the death yet, but NME reports that Gwar's management will issue a statement later today (3/24). UPDATE: Gwar's manager Jack Flanagan (Sleazy P Martini was apparently unavailable for comment) issued a statement confirming the death:

It is with a saddened heart, that I confirm my dear friend Dave Brockie, artist, musician, and lead singer of GWAR passed away at approximately 6:50 PM EST Sunday March 23,2014. His body was found Sunday by his band mate at his home in Richmond, VA. Richmond authorities have confirmed his death and next of kin has been notified. A full autopsy will be performed. He was 50 years old, born August 30, 1963.

My main focus right now is to look after my band mates and his family. More information regarding his death shall be released as the details are confirmed.

Watch a Gwar video below...