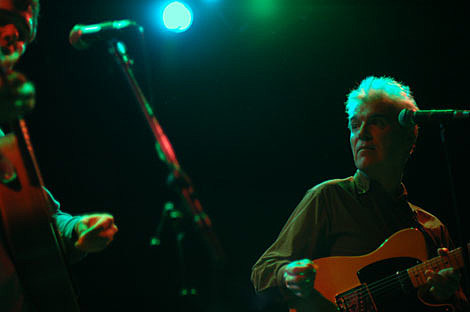 I have, after many years, finished the Here Lies Love CD project - at least this iteration of it. It will come out [February 23rd] on Nonesuch. It's a collaboration with Fatboy Slim, an upbeat series of songs sung each one by a different singer. The songs are about Imelda Marcos and Estrella Cumpas, the woman who raised her. The package includes 2 CDs (22 songs), a DVD with videos of 6 of those songs, and a 100-page book that explains it all. Singers include Florence Welch (of Florence + The Machine), Sia, Santigold, Nellie McKay, Sharon Jones, St. Vincent, Róisín Murphy and many more (even me on 1 and 1/2)... I am pretty excited about this, but who knows, it might just make people crazy.

We'll see. There will be more concrete news, with links and music, in early January.

In the meantime, I have decided to rebrand myself, inspired by Philip Morris changing their name to Altria, Blackwater to Xe, and the train I'm riding on right now that calls itself Acela - none of which mean anything, but they are cleverly evocative. When I decide on the magic word, you'll be the first to know.

What should David Bryne's new name be? The full tracklist for the new record, which also features vocal turns by Steve Earle and Allison Moorer (who both just played NYC on Friday), Cyndi Lauper, Tori Amos and Martha Wainwright, is below.

Here Lies Love premiered in March 2006 Australia, and Byrne brought the song cycle to Carnegie Hall as part of the venue's Perspectives Series in February 2007. As a stage show, the songs fit into a four act narrative, laid out in detail on Byrne's website. Those at either performance got a first look at the then-in-progress work...

Here Lies Love takes the form of a series of fairly traditional pop songs (verse-chorus-verse) played in a variety of styles (disco, rock, funk, latin, ballad) by Byrne and a small group of colleagues. Augmenting the core of guitar, bass and drums, is a percussionist and a keyboard player. The vocals are shared by Dana Diaz-Tutaan (Imelda), Ganda Suthivarakom (Estrella), and Byrne, who represents the 'voice' of other key players in Imelda's life. The stage itself is unadorned, although behind the band a small screen plays news clips and home movies of Imelda's life.

As already mentioned, the songs themselves are simple pop tunes, leaning heavily on the disco and dance genres, and could fit neatly onto any number of Byrne's solo albums. They are tuneful enough, and skillfully played, but I wonder about the connection of the music to Imelda's life. Would it have been possible to blend some traditional Filipino sounds and flavours into the music of Here Lies Love (although, admittedly, Imelda was a fan of Western dance music)? [Tidy Boy]

David Byrne will appear at a free, unticketed (first come, first served) event at the Bell House on Monday, January 11th. He presents "a short video/audio lecture called 'Creation in Reverse,' speaking to the ways that venue and context shape artistic creation, followed by a Q&A."

More Here Lies Love info and a video on the performance are below... 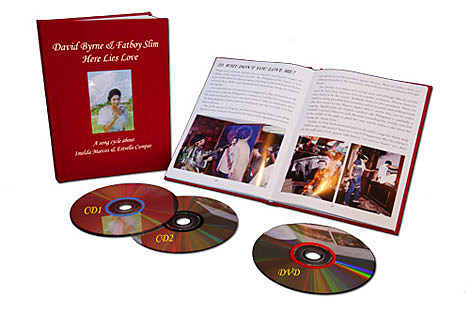 Deluxe package includes a 100-page book,
2 CDs and a DVD

(To be released 23 February 2010 on Todomundo/Nonesuch Records)

2. EVERY DROP OF RAIN
Vocals by Candie Payne & St. Vincent

3. YOU'LL BE TAKEN CARE OF
Vocal by Tori Amos

4. THE ROSE OF TACLOBAN
Vocal by Martha Wainwright

5. HOW ARE YOU?
Vocal by Nellie McKay

8. WHEN SHE PASSED BY
Vocal by Allison Moorer

2. MEN WILL DO ANYTHING
Vocal by Alice Russell

4. NEVER SO BIG
Vocal by Sia

10. WHY DON'T YOU LOVE ME?
Vocals by Cyndi Lauper & Tori Amos