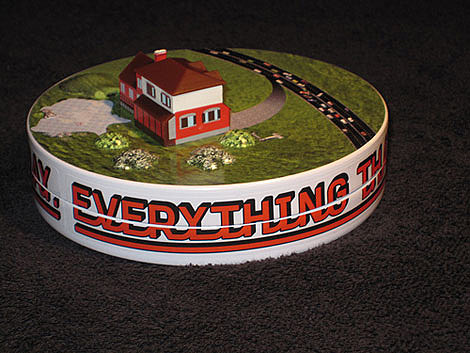 Tickets go on Ticketmaster presale (password = BOWBYRNE) @ 9AM for the recently added David Byrne show at Radio City Music Hall in NYC (2/28). The February 27th show is sold out.

In other David Byrne news, he's been writing about a recent trip to Brazil on his blog. For instance...

Paulinha throws a party at the house in the evening. There is a room with rotating fans set up for dancing (I do) and 2 Baianas on a patio making acarajé and abara (the steamed rather than deep fried version of the bean cake). A bartender makes caipirinhas and batidas out of fresh maracuja (passion fruit).

Arto Lindsay is here with his wife. I haven't seen him in years. He's been in Salvador for a number of years, but now he's moving to Rio as there will be more work there. Good to see him.

We leave around two and we hear that, at four AM, just as the party was winding down, Seu Jorge and Beth Carvalho (the singers) show up -- both of them with their entourages. The bartenders rolled their eyes as if to say "now the party will start all over again".

While he was there he also "picked up a pile of CDs" - "Some contemporary stuff like Lenine, but mostly Afro-Samba bands, Northeastern stuff and some other beautifully recorded folkloric artists..." And that's how he programmed his current Radio David Byrne playlist.

He also wrote an interesting blog post about the battle between Bratz and Barbie (Bratz lost).

The above picture is of the Deluxe version of David Byrne and Brian Eno's new album.