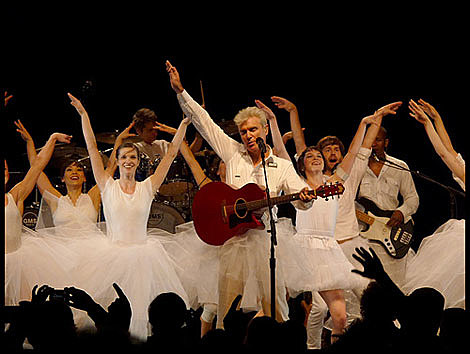 "C warned me that there was a not so complimentary review in the NY Times this morning, and advised me against reading it. I don't read all the press and reviews we get, but as I do read that paper regularly, I would have inevitably stumbled upon it. Apparently the reviewer, Jon Pareles, loves the Bush Of Ghosts album and has some kind of nostalgia for those days. We all know music snobs who like to remind everyone that they heard so and so back when they were really good. This, however, is the same reviewer who leveled charges of "cultural imperialism" against Bush Of Ghosts in his Rolling Stone review back in the early 80's. For years afterwards, almost every interviewer asked me to respond to his charge, and many press articles quoted it. It was like the joke about "When did you stop beating your wife?" -- the charge was silly and ill-informed, but one was constantly put on the defensive, and even assumed to be guilty, simply by the question being raised. It was annoying, it lasted for years, and it hurt.

Given that track record, I guess 30 years from now he'll figure out what this show was about.

I still haven't read the review, and don't intend to. While taking criticism on board can be constructive, it can also be detrimental to the creative process if it's considered while that process is still under way. It undermines one's enthusiasm and will -- which is OK, beneficial even, but only after a tour (for example) is over. This review, by all reports, wasn't helpful criticism anyway -- it seemed to be one of those reviews that comes from some psychological issues the writer has -- and therefore even a belated reading is not going to help us refine what we do." [DAVID BYRNE]

The review in question was titled "Spectacle, Including a Singer in a Tutu". As you can see above, there were tutus! Our previous Radio City photo set didn't capture that aspect, as all of those pictures were taken during the first three songs.

Missed both Radio City shows? Good news! David Byrne has added a June 3rd show at the Wellmont Theater in Montclair, NJ. It happens after (over a month after) he gets back from the European leg of the "Everything That Happens Will Happen Today" tour. $65.00 & $45.00 tickets go on sale Saturday at 10 AM.

All tour dates, and TUTU VIDEO FOOTAGE, below...


Burning Down The House from Jane Kratochvil on Vimeo.