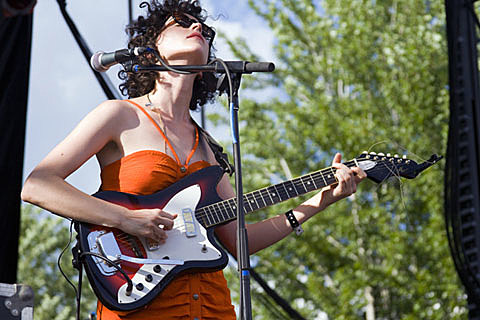 David Byrne and Annie Clark are collaborating on music for a future Housing Works benefit. There's no date set for that, but Asphalt Orchestra will be debuting a version of one of the songs they've been working on...

A few months ago we had [Here Lies Love arranger] Tony Finno arrange the horns, and we performed one of the songs -- tentatively titled "Who" -- at the end of Annie's show at the Rose Room at Lincoln Center. Now, having been approached by the Bang On a Can spinoff Asphalt Orchestra, with the help of [Asphalt saxist/producer] Ken Thomson we've adapted another song called either "Two Ships" or "The Movie" for their group. This will be an instrumental version and we'll do a vocal version later. [David Byrne]

Asphalt will perform that song on Wednesday, August 4th, at the first of five free shows the avant-marching band is doing around the Lincoln Center as part of LC's Out of Doors Festival. Locations and times for the band are below.

In addition to that piece, they'll be debuting a commission by Yoko Ono; other songs in the group's repertoire include commissions by Tyondai Braxton of Battles and Stew & Heid Rodewald of Passing Strange and BAM Next Wave 2010. The 12-piece will release a seven-track CD of its material on August 3rd through Canatloupe Music. That includes a blisteringly dissonant song by Swedish metal band Meshuggah and an intricately-arranged version of Bjork's "Hyper-Ballad." There are a few more typical "ra-ra" maching band songs on the album too (Zappa in particular is already quite melodic and pompy), but the band focuses on getting unusual sounds out of the limited instrumentation. Live, they move in unique coordinated patterns, so the experience is individualized to the space and where you stand.

As an aside, this Saturday at Lincoln Center Out of Doors Festival is going to be particularly amazing, with the "Detroit Breakdown" lineup of Mitch Ryder, ? and the Mysterians, The Gories, Death and more.

St. Vincent has her own free show this weekend, at the Central Park SummerStage Sunday (8/1) afternoon, with openers Tune-Yards and Basia Bulat.

A video of Asphalt Orchestra doing that Meshuggah song on WNYC, and their schedule, plus a video of Annie doing a nylon-string version of "Actor Out of Work," are below...

About a year ago, I ran into St. Vincent at the Housing Works benefit in which Dirty Projectors and Bjork performed together. How's that for dropping a lot of names in one sentence? Anyway, Annie and I had previously met at the Dark Was the Night benefit in which we both performed, and I'd said I was a fan of her music and disturbing videos. So when Rachel at my office, who volunteers at Housing Works Bookstore Cafe, passed on a suggestion that Annie and I do a similar collaboration, I immediately said yes, though I didn't think we could pull together a short set of new material as fast as Longstreth did (6 weeks, I think). They'd raised the bar pretty high, and as a result we agreed to come up with new material.

I believe it was Annie who suggested we hang the material around a brass ensemble, which creatively sounded great, and besides it could be acoustic and wouldn't require amplification in the intimate Housing Works space. Beyond that, we didn't know in what direction things would go or how we'd work together. We were still both on tour back then, so we began by passing snippets and inspirational MP3s back and forth. I had some work in progress that I re-arranged, and Annie passed me some horn tracks she'd made in GarageBand. I restructured those a little and wrote some melodies over them. We're still inching forwards on this -- no completion date is set, which is a nice situation to be in. However, we did prod ourselves to complete a couple of tunes by setting some deadlines. A few months ago we had Tony Finno arrange the horns, and we performed one of the songs -- tentatively titled "Who" -- at the end of Annie's show at the Rose Room at Lincoln Center. Now, having been approached by the Bang On a Can spinoff Asphalt Orchestra, with the help of Ken Thomson we've adapted another song called either "Two Ships" or "The Movie" for their group. This will be an instrumental version and we'll do a vocal version later.

Asphalt Orchestra performs this and other commissioned works on August 4 outdoors at Lincoln Center.