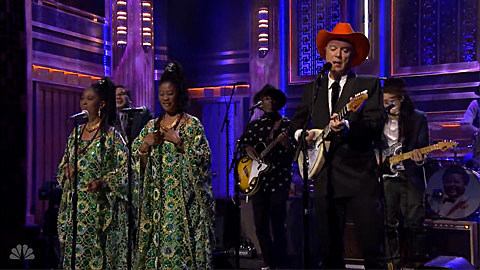 The monthlong 2014 Red Bull Music Academy starts this week here in New York City, and one of the most anticipated events is "Atomic Bomb! The Music Of William Onyeabor" tribute that happens at BAM on Friday and Saturday (5/2 & 5/3). It features singers David Byrne, Alexis Taylor (Hot Chip), Kele Okereke (Bloc Party), Dev Hynes (Blood Orange), Joshua Redman, Luke Jenner (the Rapture) and more paying tribute to the music of the Nigerian funk singer and synthesizer pioneer, and features a backing band including Sinkane, Money Mark and onetime LCD drummer Pat Mahoney. Tickets are still available to both nights.

If you were on the fence, wondering what to expect or both, David Byrne and the band dropped by The Tonight Show with Jimmy Fallon on Tuesday (4/29) to perform "Fantastic Man," one of the more winning tracks from last year's essential Who is William Onyeabor? compilation. By the looks of it, this is going to be -- like the Gene Clark 'No Other' tribute -- a straight-up, "let's do it like he woulda" kind of thing. Which is good news I think and bodes well for this weekend's shows. You can watch the Tonight Show performance (and compare and contrast with the Onyeabor original) below...

You can read how it all came about over at David Byrne's website. In addition to the shows happening in NYC, the Atomic Bomb Band most of the same singers/players are performing shows next week in San Francisco and Los Angeles. Dates and lineups are listed below...