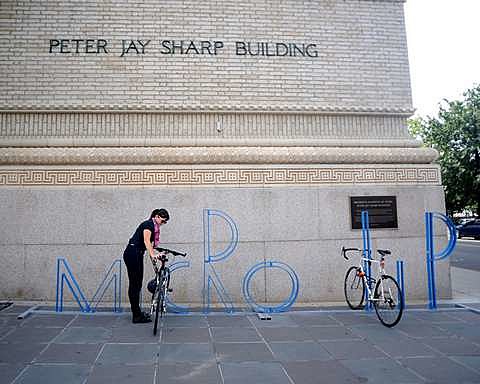 BAM just revealed two new bike racks today designed by David Byrne (who has designed bike racks in the past). The racks were manufactured by Dero Nike Racks, are bright blue, and are in the shapes of letters with one spelling "pink crown" and the other spelling "micro lip."

"What a thrill to be invited to design more bike racks for NYC," says Byrne. "I get to BAM fairly often, and the existing racks are often full, so it's great that there will now be more. When designing these bike racks, I wondered how I could make something that was modular, yet variable--a design that wouldn't always look the same and could vary depending on season and placement. I realized that a few very basic shapes--a semi circle, a line, and a V shape--would allow one to make a good percentage of the letters of our alphabet. With help and advice from Dero Bike Racks, we figured out how these components could be easily and quickly swapped out to spell different words. For example, the letters could spell out the productions at BAM or any random message for that matter."

As mentioned, David Byrne is putting out a collaborative album with St. Vincent called Love This Giant on September 11 and will be touring in support of it. That tour hits NYC on September 25 and 26 at Beacon Theatre and Spetember 29 at Williamsburg Park. Tickets to all three shows are still available.

As mentioned last week, BAM is opening a new venue, BAM Fisher, next month during the Next Wave Festival.