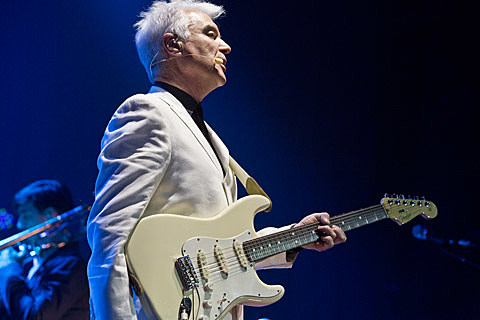 About a week ago, on November 7th, Super Typhoon Yolanda (as Typhoon Haiyan is known in the Philippines) made landfall. It was the strongest tropical cyclone to make landfall on record. Ever. The full extent of damage and the death toll have yet to be assessed, but it's unimaginably catastrophic. The city of Tacloban on the island of Leyte has been almost wiped off the face of the earth. No place could have withstood this storm.

This past spring and summer, a musical I had been working on for years called Here Lies Love ran at The Public Theater here in NY. It takes place in the Philippines, and it follows the rise and fall of Imelda Marcos, the former first lady of the Philippines. The first song sung by Imelda begins with the words "When I was a young girl in Leyte." The show is about the resiliency of the Philippine people--that sentiment couldn't be more timely.

Upon hearing about this tragedy, the cast contacted me about doing a show to raise money for relief efforts. Most of our cast is Filipino, and all of us feel the same way. It's personal for all of us. We all dropped whatever we were doing and this concert version of the show will happen in one week--Monday, November 25th, 8PM, at Terminal 5 here in New York.

David Byrne's Fatboy Slim collaboration Here Lies Love ended its Public Theater run over the summer and was looking for a new home. A permanent new home hasn't been announced yet, but David did just announce that he's doing a Here Lies Love show on November 25 at Terminal 5 to benefit the people of the Philippines affected by Super Typhoon Haiyan. Tickets are on sale now, and proceeds will benefit Doctors Without Borders.