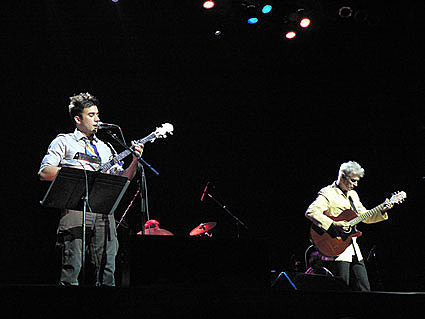 The Revenge of the Book Eaters show at Beacon Theatre in NYC last night was great. I don't have everyone's name who was involved, but basically there was a host and a guitar-playing co-host, and a comedic reading/sketch by Jon Stewart, and three songs and witty banter by The Long Winters' John Roderick, and a short 826NYC documentary and information session with Dave Eggers, and about five songs by Sufjan Stevens & band, and a reading by Sarah Vowell, and hugs by Dave Eggers to whoever donated at least twenty more dollars at the show, and about five country songs by David Byrne & band (2 covers, 2 obscurish Talking Heads songs, and a new song that's coming out on his drummer's band's CD), AND THEN there was a very special encore.

If I had to choose which indie rock icon David Byrne would join on stage next, it wouldn't be Sufjan Stevens. His multiple appearances with The Arcade Fire were a lot more exciting, but nonetheless this one was special. Probably spawned from circumstance (they were both on the bill), they together covered a song about Michigan, that as Byrne pointed out, "wasn't written by Sufjan" - it was "Saginaw Michigan" by Lefty Frizzell. The host promised us the duet earlier in the night if we (the audience) put at least $5000 in Dave Eggers' bucket. They collected over $15,000.

Jessica Suarez has a 4:47 slightly crackly MP3. Stereogum has a shorter, cleaner MP3 and video.