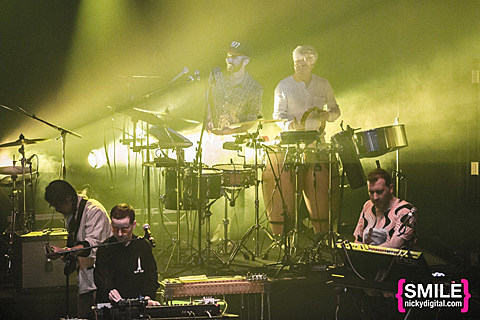 Hot Chip played their second of two sold-out shows at Webster Hall on Wednesday (9/5) which was pretty much a non-stop dance party. (It's always a bit disconcerting to feel Webster Hall's floor bounce so much.) Like they did at Webster the night before and Baby's All Right on Monday, Hot Chip finished the night with a cover of Bruce Springsteen's "Dancing in the Dark" with a bit of LCD Soundsystem's "All My Friends" at the end. After seeing they had brought out LCD's Nancy Whang on Tuesday, I was wondering who might make an appearance on Wednesday.

I figured it would be Pat Mahoney who was LCD's drummer (and Hot Chip's on one tour) and whose band Museum of Love opened the show. But it turned out to be someone a little more special: David Byrne whose shock-white hair was instantly recognizable from where I was in the balcony before they actually announced him. He held it down on tambourine duty. Johnny Lam, who played with Hot Chip's Alexis Taylor and David Byrne at the William Onyeabor tributes at BAM, was on stage as well playing pedal steel. The crowd went nuts, and even more so when they realized "All My Friends" had kicked in. (James Murphy watched from the VIP area.) You can watch a few short instagram videos below.

David Byrne joining @hot.chip onstage at Webster Hall for cover of Bruce Springsteen / LCD Soundsystem "Dancing in the Dark/ All My Friends"

And here the LCD Soundsystem "All My Friends" part - David Byrne in upper right.