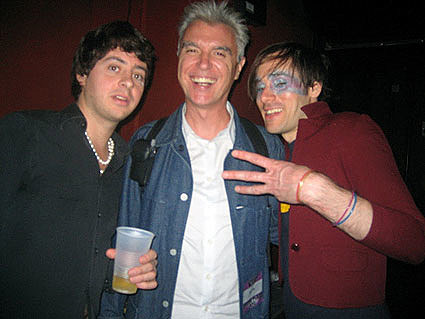 The NY Times has a great piece on David Byrne today

Perhaps more surprising is that while Mr. Byrne has been busy being a curator, sculpturing, drawing, mounting theatrical pieces about deposed foreign leaders and buying shoes, he has also become, without fanfare or Talking Heads reunion tours, perhaps the single greatest influence on the current generation of indie rockers. Four of the most hotly anticipated CDs of 2007 — by the Arcade Fire, LCD Soundsystem, !!! and Clap Your Hands Say Yeah — are coming from bands that, each in its individual way, show a clear stylistic debt to Mr. Byrne and his old group......his conversation ranges energetically from computerized embroidery machines to a recent visit to a neuroscience lab in Canada with his pals from the Arcade Fire.....

This has been an incredible opportunity to program this series of shows and be offered this kind of programming freedom. I sure hope I can pull it off.

Tickets for those shows here.

By the way, David Byrne never showed up at the Wainwright Christmas show - what was up with that? Not that it was a bad show - it was great. Antony showed up instead and did the most amazing cover of Blue Christmas (Elvis style). David did show up at the New Years Eve CYHSY show though - in the audience (and backstage where I heard he and Alec Ounsworth were seen chatting). 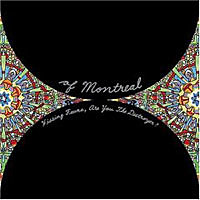 2007 should be a big year for Of Montreal. Their new GRAND glam album Hissing Fauna, Are You the Destroyer isn't out until January 23, 2007, but everyone's been raving about it since it leaked months ago. You can download an MP3 above.

With their new album, Kevin Barnes takes the recipe for his glam pop excess of that last endeavor, steps up the Prince and embraces Sly Stone, adding more beats and bass to the mix, to ensure more time on the dance floor. However, with the lyrics, Barnes has turned the otherworldly absurdist character driven tales of yore, and instead turned the pen on himself. As for "Heimdalsgate...", not only is the track one of the most personal of Barnes' songs, but also one of the most straightforward pop tunes of his career.

You can STREAM THE WHOLE ALBUM TOO

(Now if only they hadn't gone and done that stupid steakhouse commerical...)

"Barnes has recently switched to a MacBook Pro running Apple Logic Pro 7, but for the making of Hissing Fauna, Steinberg Cubase was his main recording and mixing platform." [if that quote interests you, definitely check out this article]