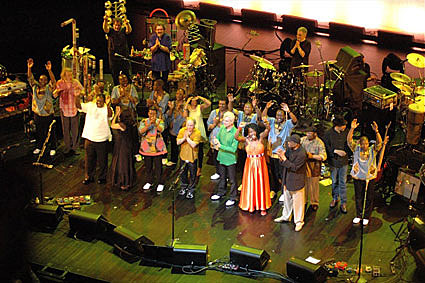 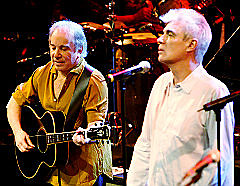 Nobody sings a Paul Simon song better than Paul Simon - except maybe David Byrne. The former Talking Head front man burned down the house at Wednesday's Brooklyn Academy of Music gala, bringing his signature wiggles and yelps to "You Can Call Me Al" and "I Know What I Know." Simon told us: "David's the only person I could think of, besides me, who has a New York sensibility and knows those African grooves." Simon, who also performed with Brazilian chanteuse Luciana Souza and may take his "Capeman" songs on tour, added, "I've known David for years, but we've become close friends in the last six months." Byrne told us he's collaborating with their mutual friend Brian Eno "for the first time in 20 years. Brian had written a lot of music, but needed some words, which I know how to do. What's it sound like? Electronic gospel. That's all I'm saying." [Daily News]

Sunday night was the last "UNDER AFRICAN SKIES" show (the David Byrne ones). "SONGS FROM THE CAPEMAN" happened in early April. The third and final of week of Paul Simon's residency is called "AMERICAN TUNES". That kicks off April 23rd with the hilarious (to me) bill that includes both Grizzly Bear (one of my favorites) AND Josh Groban (one of my mom's favorites). More pics and stuff below.... 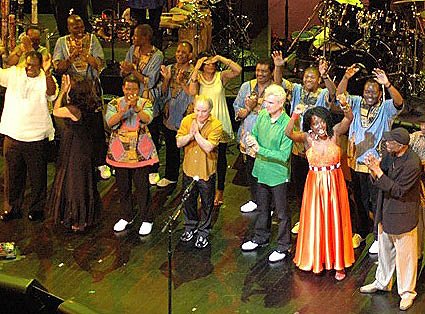 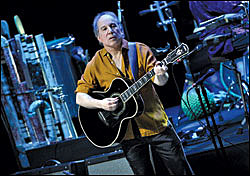 What does a lil' ol' boy from Forest Hills, Queens, know about the so-called dark continent? As Paul Simon has proven over the years, plenty. Simon has never posited himself as an ethno-musicologist, but his everyman approach to African forms has always worked in his favor, since he's drawn attention to the inherent emotional similarities in the varied musical forms, rather than emphasize stylistic exotica.
That was clear throughout this concise two-hour program, which served as the bedrock for BAM's annual gala -- an event that drew an aud dominated by nonpartisans who readily responded to the immediately infectious sounds that emanated from the Harvey Theater stage on Wednesday night. [Variety]

"For Melillo, having Simon in the house under any capacity is a welcome addition to the theater, and he notes that negotiations are going on to create an album from the series of concerts." [Hollywood Reporter]