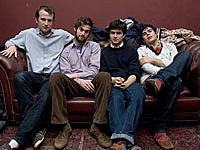 David Byrne went to the better of the two shows I think...

Went to see Animal Collective and Vampire Weekend at Webster Hall last night (Oct 1). VW was really good — poppy, but fairly skewed too, with bits of soukous guitar thrown in from time to time, as if it was just a way of playing lilting guitar and not a specific African style. They’re not a “world music” act by any stretch; these various styles of playing are all just out there now, to be used when appropriate. I wondered if they sounded a little like early Talking Heads, a little bit, maybe, which of course wouldn’t bother me. They got the crowd moving, which is pretty impressive for an opening act. Catchy tunes too. I’d heard some on an EP or demo CD. They said they’re working on an album now. [Read about Animal Collective's set @ David Byrne's blog]

A few days later David was a special guest at one of Lucinda Williams' Town Hall shows.

This Saturday, David is talking about bikes. He's also talking in Boston on October 10th. (and as a commenter pointed out) It was announced at tonight's Wordless Music Series show, that David Byrne is playing two "Wordless" (with words) shows on January 24th & 25th.

Vampire Weekend's only listed tour dates are in Europe.