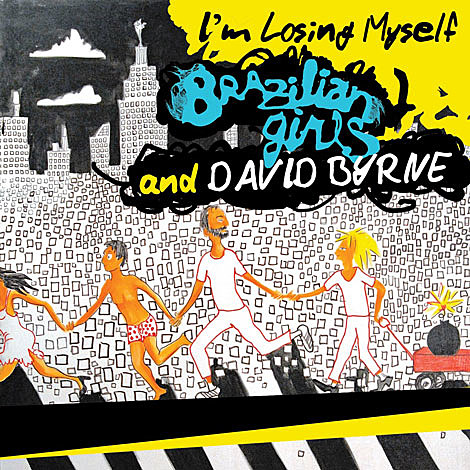 The Brazilian Girls have teamed-up with the legendary David Byrne to release an English-language version of the song "Losing Myself." Byrne duets with lead singer Sabina Sciubba on the new version of the song, available exclusively through iTunes on March 24.

Sciubba explains that the song is "a journey through New York City's subway, streets, crowds, nights and clubs. Everywhere you go, you leave something behind: your scarf, a shoe, a memory, your money, an ear, your friends, your head ...until you end up being light as a feather and you have nothing left but your freedom."

In related news, David Byrne is now confirmed for the Dark Was the Night concert. Bon Iver was also recently added. The only previously-rumored band now in question is Grizzly Bear. The National, Dirty Projectors, Feist, Dave Sitek, Sharon Jones, and My Brightest Diamond are also all on the May 3rd Radio City Music Hall bill, and who knows who else they will get to join. An official message reads that artists "will perform songs from the Dark Was The Night' compilation", and "The show will also include mini-sets and collaborations by various artists." Tickets are still on sale.

Tickets are also still on sale for David Byrne's June 3rd show at the Wellmont Theater in Montclair, NJ.