"Loser’s Lounge is one of those New York City treasures that help make fighting through the crowded sidewalks and the rest of the daily hassles we face worthwhile." [The Villager]

I have nothing but love for the Loser's Lounge, but of course there's gonna be some backlash when people find out that, instead of the Beastie Boys, Television, Blondie, or even David Byrne and his real Talking Heads playing the fourth-to-last night ever at CBGB, CBGB's books your Talking Heads tribute act instead. Some thought maybe the real David Byrne would show up anyway - maybe to join them on stage for a song or two. Didn't happen. In fact, according to numerous commenters, David was enjoying himself further uptown at the Jenny Lewis and the Watson Twins show at Town Hall. 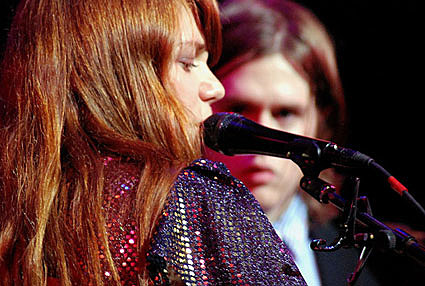 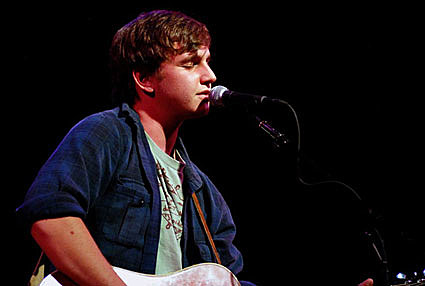 GLENNIS WAS AT TOWN HALL TOO
"I then went and watched the most adorable and wonderful concert at Town Hall; Jenny Lewis & The Watson Twins. I'm absolutely head over heels in love in a non-lesbo (but totes Glesbo) fashion with JL. Watch this video of her as a teen being interviewed by the crappy show "Teen Set" in 1991. She tries on hats and jumps on a trampoline."

MICHAEL WENT TO CBGB
"The band last night was the Loser's Lounge - a group that did covers of Talking Heads, Brian Eno, etc... but each song had a new singer who had once graced the CBGB's stage. I didn't know a lot of the names but their stories were all similar, 'I played here back in 1981! I can't believe it's over.'

Above photos by Bao.

David Byrne recently saw Joanna Newsom and Under Byen while at Pop Montreal. Chart Attack says Under Byen was drowned out by crowd chatter.

Listen to the October 15th Jenny Lewis concert on NPR. You can also listen to Built to Spill.

The Watson Twins (sans Jenny) are opening for Oakley Hall and Shooter Jennings at Irving Plaza on November 4th. It's part of CMJ. You may remember a post about Shooter at Bonnarroo.