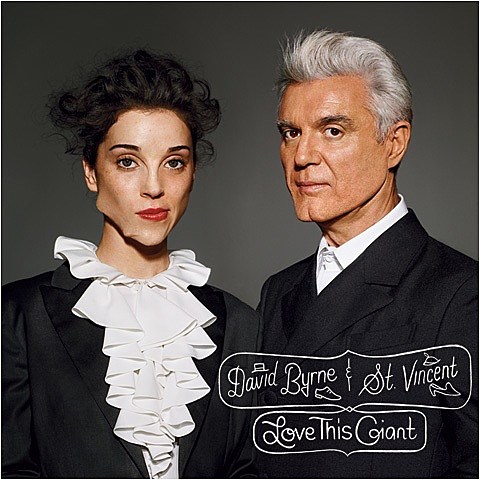 "I am thrilled to announce the record David Byrne and I have made together, Love This Giant. We started our collaboration around the fall of 2009 after being approached by Housing Works to write and perform a night of new music for charity. We decided to center the music around a brass band and began sending ideas back and forth in every form: wordless melodies, melody-less songs. After a while we had enough of a body of work that David, not one to do anything halfway, suggested we record it and put it out. I am very proud of what we created and excited for it to hit your ears." - Annie Clark

David Byrne and St. Vincent have long held a mutual appreciation society, having written a song together for the Asphalt Orchestra, and Annie Clark singing on his Imelda Marcos opera, to name two. Well now the two have collaborated on an album, Love This Giant, that will be released via 4AD on September 11. You can download "Who" from the album via a widget below.

The album is said to eschew traditional bass/guitar/drum pop in favor of "idiosyncratic horn arrangements," which were aided by Kelly Pratt of Bright Moments. He'll be leading an eight-piece brass ensemble as part of that tour. More about those arrangements in a statement from David Byrne is below.

In the meantime you can catch Bright Moments on tour with Juxebox the Ghost and Savoir Adore,, which comes to NYC for a sold-out show at Bowery Ballroom on June 22.

All dates are listed below along with that widget...

I had seen St. Vincent a couple of times in concert here in NY, and first met her after the Dark Was The Night benefit concert at Radio City organized by the Red Hot Organization. I was a fan and told her I loved her then recent video--it's pretty creepy and disturbing. By coincidence, not long after, we both caught Dirty Projectors and Bjork at their collaborative benefit at Housing Works on Crosby Street. Soon after, Housing Works approached us separately about doing a similar event. We agreed (but the event has yet to happen).

Annie suggested we use a brass band rather than the typical rock ensemble--which would brilliantly solve the sound problems inherent in performing in a small joint like Housing Works. A brass band wouldn't need mixing and could be heard acoustically in a room that size. They'd balance themselves. Easy. We'd only need vocal mics.

I loved this idea--we immediately restricted ourselves given all the possible directions we could have taken--and suggested we write some tunes based on this brass concept, just a few to see if we could actually work together and to see if we both liked the results. That was a few years ago. The writing was truly collaborative: sometimes Annie would send me some synthesized versions of brass or guitar riffs and I would arrange them a bit and write a tune and words over them; other times this process would be reversed and I would send some musical ideas to Annie for her to write over. This material would get passed back and forth--each of us adding and elaborating on it. There are songs on which one of us sang on the demo and the other ended up singing the finished version. Eventually we had a handful of songs and mutually decided that the concept was working and we would continue.

I found that writing words to this brass-centric sound meant I had to re-think my lyrical approach. Brass has many associations--marching bands, Italian banda, New Orleans bands, classical chorales, RnB and funk. In general it's not a subtle sound, so the words had to respond to that. We worked with a group of great arrangers, usually passing them midi versions of the parts that we had created on computers. They did their arrangements and often sent us synthesized versions to hear before the real players came in. The process involved a number of steps, so it took a while. On some songs I re-wrote the words about three times before I hit a direction I felt worked!

We both had other records and tours in the works, so this project was done in fits and starts, and each series of recording sessions involved a lot of players. It was an education that involved figuring out the variety of sounds and approaches one could come up with using more or less the same group makeup on every song--we could go funky or majestic with the exact same band. When John Congleton added some beats we could see a surprisingly song-centric record emerging. A lot of people, hearing a description of this project, assumed that it might be an artsy indulgence, but somehow it didn't turn out that way. It's a pop record--well, in my book anyway. I started to sense that we were ending up with a sound and approach I'd never heard before. There were elements that were reminiscent of things I'd heard, but a lot of it was completely new. Very exciting!

By the beginning of 2012, we could see the end in sight and became more serious about wrapping it up and planning a series of performances. We did a photo session with photographer Richard Burbridge and Gabe Bartalos for the cover art and invited artist Steve Powers to create some typographical work to go over that.

The record will be out September 11 (wow, auspicious date!), but you can download the song "Who"--one of the first ones we wrote and completed--by clicking here.

Tour dates can be found on the Love This Giant site. Kelly Pratt (Bright Moments) is leading a brass group that will travel with us. And, joined by drums and keyboards, we'll be doing many of these songs and a bunch of songs that we suspect people will already know--all played by this group.