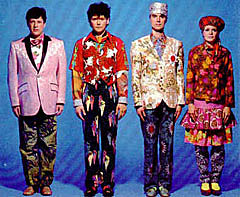 David Byrne is suing the governor of Florida, alleging that he used the Talking Heads' 1985 single "Road to Nowhere" without permission or proper licenses.

Byrne is seeking $1 million in damages from Gov. Charlie Crist, who's also Florida's former Attorney General, and his senatorial campaign for use of the song earlier this year in a website and YouTube ad attacking his then-Republican primary opponent, Marco Rubio. Crist has since changed his campaign and is running as an independent candidate. [Billboard]

Check out a recent interview with Byrne, in Guernica Magazine.