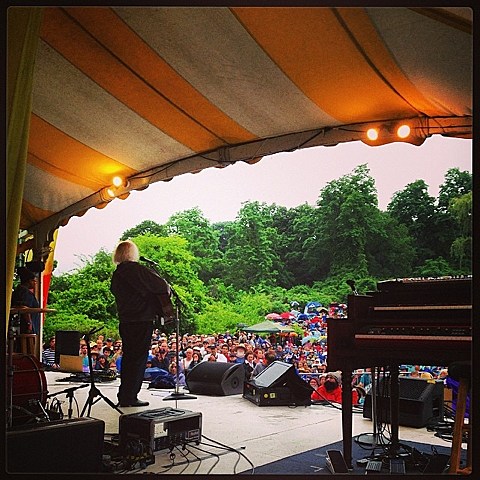 It isn't too often that a well respected rock and roll vocalist who's more than five decades into his career as an artist decides to hit the stage with only the support of a few acoustic guitars and an assortment of memories.

Despite this, David Crosby is offering one of the more unique and instantly striking stage shows around over the course of his 2015 summer tour in support of his latest offering 'Croz,' which upon it's release last year marked the singer's first studio album in twenty years.

...Most of the evening was dedicated to lesser known, reflective songs spanning the course of Crosby's extensive career - "I'm not going to try some of the heavier songs, that needs a full band and I'm not that good of a guitar player," the singer explained, despite contradicting opinions from the audience.

This made enough room for the addition of two songs from The Byrds, which Crosby was a founding member of. The pairing of an acoustic guitar reached notes on "Triad" and "Everybody's Been Burned" where there typically would've been another vocalist onstage to reach, but the result was met with strong praise from the crowd. [Music Enthusiastic Magazine]

Croz continues on tour through July, and he hits NYC proper on Thursday (6/25) at Town Hall. Tickets for Thursday's show are still available.

All dates are listed, with that video, below...