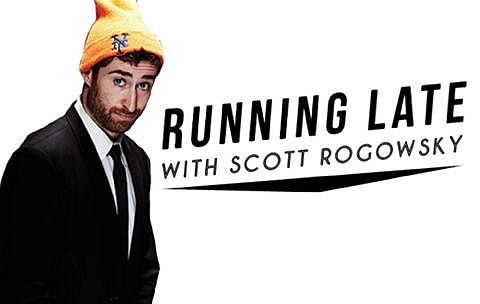 There's a fantastic recurring NYC-based comedy/talk show that I think I may have mentioned here once in passing but I am totally zoning out to a Pink Floyd Wish You Were Here Trance Remix CD and can't muster the energy to use the search bar staring me in the face on the BV home page. [Ed: you did, Klaus.] The show is called Running Late With Scott Rogowsky and it has taken place within the confines of places like The Pit, 92Y Tribeca, and, more recently, Galapagos Art Space.

His roster of past guests is truly staggering and boasts names like Chris Elliott, Rachel Dratch, Reggie Watts, Michael Showalter, David Wain, Judah Friedlander, Janeane Garofalo, Big Ang, R.L. Stine, Jonathan Ames, A.J. Jacobs, Chris Barron, Jean Grae, Todd Barry, and more. The next installment of Running Late will take place at Galapagos on Thursday March 28 and will feature David Cross (who recently appeared at the 92nd Street Y), Andrew WK, the great Alan Zweibel, and Scott Wiener of Scott's Pizza Tours. Andrew WK will perform Party Hard with the Running Late band and maybe a few more jams! Scott Wiener will be giving away pizza! David's wife Amber might make the scene! Legends David Cross and Alan Zweibel will be dropping knowledge down our gullets! Tickets are on sale now so get em while you can.

Sate your appetite for Running Late with some xtreme coverage on Thrillist and watch a couple "Scott's Pizza Tours" below.