David Cross on set with David Koechner and Amy Sedaris 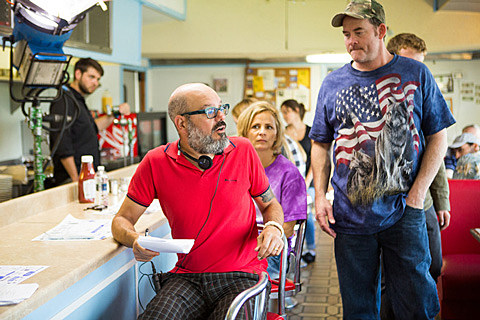 Hits is a dark comedy exploring the nature of fame in 21st century youtube america. The film takes place in a small town in upstate New York populated by people who trade in unrealistic expectations. It's a story in which fame, delusion, earnestness, and recklessness meet, shake hands, and disrupt the lives around them.

You can watch the trailer for Hits below.

We want you to decide how much tickets cost and you pay artists directly, not distributors or studios. This is an experiment, a first of its kind to see if we can make it more sustainable for both fans, and filmmakers. In order to do this in theaters as widely as possible we need your help to raise $100K. We are distributing ourselves and there are costs associated with making all of this happen. In addition to theater rental fees, we need to cover our marketing and publicity efforts. We ideally want to be in 50 markets, but the more money we raise the more theaters we can be in, so if we go over $100k, we'll just expand our plans, which would be great!

You can watch a video where Cross explains the whole thing over at the Kickstarter site. If the campaign is successful, Cross is planning on distributing via bit torrent, and theaters and via iTunes, Google Play, etc. He's about a quarter of the way there, currently, with 27 days to go.