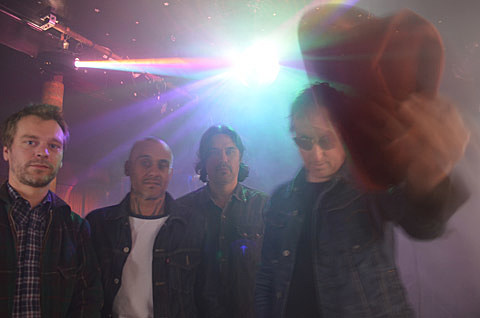 David Kilgour & the Heavy Eights will release their new album, End Times Undone, on August 5 via Merge. The album was recorded in short bursts over three years, mainly out of rehearsals. "We've become so obsessed with capturing the creative moment as early as possible when we get together," says Kilgour who also fronts legendary NZ band The Clean. That process seems to have paid off, the new album is a real gem, sparkling, with an off-the-cuff charm that compliments their melodic sensibilities. Fans of Real Estate who have never dipped a toe into Kilgour's pool, time to jump in. A prime example of the album's creative process is single "Comin' On." Says Kilgour, "That was one of the ones where it was a rehearsal really, and I missed the first chorus. That was the wrong arrangement... but we just ended up liking it so much." You can stream it below.

He and the band will be on our side of the world this summer, playing Merge 25 next month, and then playing a few shows on the West Coast. Then in August, Kilgour will hook up with his brother Hamish and Robert Scott for The Clean's tour that hits NYC on 8/28 at Glasslands which is now sold out. Luckily, The Clean have added another another NYC show, playing Rough Trade on August 21. Tickets for that one go on sale today (6/20) at noon. If you'd like to go for free, we're also giving away a pair, and details on that are below.

The Clean's four-LP Anthology is out July 15. All Clean and David Kilgour dates are listed, along with the new Kilgour song, below...

======================
For a chance at winning a pair of tickets to see THE CLEAN AT ROUGH TRADE: either tweet something that includes both @BrooklynVegan AND "ARTIST" in the tweet, or send an email to BVCONTESTS@HOTMAIL.COM with the subject line "THE CLEAN". Include your first and last name in the email. We'll pick a winner at random and contact them with more details. If you enter by email, it will not be shared with anyone else. Good luck!
======================