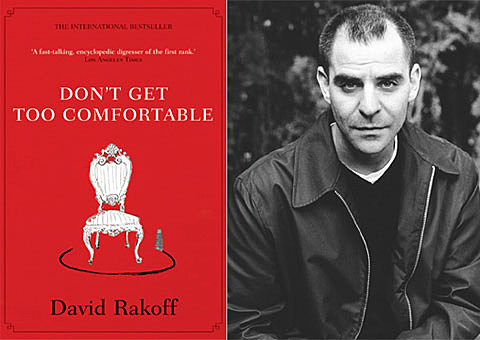 When writer David Rakoff died Thursday at the age 47, he was barely the age he said he was always "meant" to be. In his 2010 memoir, Half Empty, he wrote, "Everyone has an internal age, a time in life when one is, if not one's best, then at very least one's most authentic self. I always felt that my internal clock was calibrated somewhere between 47 and 53 years old."

Rakoff died in New York City after a long struggle with cancer -- an ordeal that he wrote about with sobering honesty and biting wit.

"I can see a great beauty in acknowledging the fact that the world is dark," Rakoff said in a 2010 interview. It's healthy, he insisted, to employ "a certain kind of clear-eyed examination of the world as it is."

Rakoff was born in Montreal, studied East Asian literature and was diagnosed with lymphoma at 22. He recovered, and wrote a fan letter to humorist David Sedaris, which led to frequent contributions to This American Life. In his first essay on This American Life, Rakoff reflects on his role as -- oddly enough -- Sigmund Freud in the Christmas display of an upscale department store.

"In the window I fantasized about starting an entire Christmas Freud movement: Freuds everywhere, providing grown-ups and children with the greatest gift of all: Insight."

In May, Rakoff and some other This American Life contributors appeared onstage before a live audience in New York City. By then, a recent surgery to remove a tumor had severed nerves in his left arm, leaving him unable to feel or move that limb. He spoke wistfully about the pleasure he once took in the rigorous study of modern dance:

"You become this altered humming -- dare I say beautiful -- working instrument of placement and form and concentration," he said. "But like I said, that's a long time ago and a version of myself that has long since ceased to exist. Before I became such an observer ..." His voice trailed off and he was not able finish. He just stood there on the stage. But then, he did something wonderful: He danced. Gracefully, always gracefully. [NPR]

Some videos starring David are below.

David Rakoff in "This American Life: The Invisible Made Visible"

David Rakoff: Why I Write (And Why It Only Gets Harder)