Rarely do we at BrooklynVegan.com devote a singular post to a single, recurring, local comedy show. But sometimes a single, recurring, local comedy show reaches such a magnificent milestone that they deserve the proverbial tip o' the hat. Therefore, it is with a heartful of joy and pride that I say "Happy 8th Birthday" to Seth Herzog's superior comedy/variety/insanity show Sweet!

Herzog is a preposterously hilarious and bombastic staple of the NYC comedy scene who also happens to be the warm-up guy for Late Night with Jimmy Fallon. Sweet, which currently takes place at Ella Lounge on Tuesdays for a measly $5, serves as sort of an exercise yard where he and his "wicked famous," "famous," and "definitely on the road to being famous" friends have carte blanche to get up there and do whatever they fuck they feel inspired to do. The line-ups each week are engorged with unbelievable talent and usually include an appearance by his mother, Kera Herzog. While the NYC comedy scene loses great comics to the allures of Los Angeles on a monthly basis, Sweet remains a constant in showcasing the best talent around. As he said in a great NY Times article:

"The thing about L.A.," Mr. Herzog said, lamenting Hollywood's never-ending lure, "is that all great New York comics move out there. I have to tell my audience: 'Those guys you loved? They left. But now you have these new guys, and you're going to love them soon. I promise."

8 years is a long time for any independent comedy show to survive in this city. To celebrate this monumental milestone, TONIGHT (9/18), the Sweet 8 Year Anniversary Show will take over the Studio at Webster Hall!! The show will feature David Wain, Ted Alexandro, Will Forte, Questlove, as well as surprise guests! I cannot tell you WHO the guests are but, trust me on this one, they are very, very, very, very, very great and beyond worth the $15 day-of-show ticket price (flyers say $10, but that ain't what they cost yo). Tickets are currently on sale and still available!

If you can't make it to tonight's show, don't forget you can catch regular Sweet at Ella Lounge on Tuesdays for a measly $5. It is still unclear whether or not Sweet will return to its former home The Slipper Room who are scheduled to reopen, heavily renovated, after closing in 2010.

Flyers for the 8th Anniversary show are below. 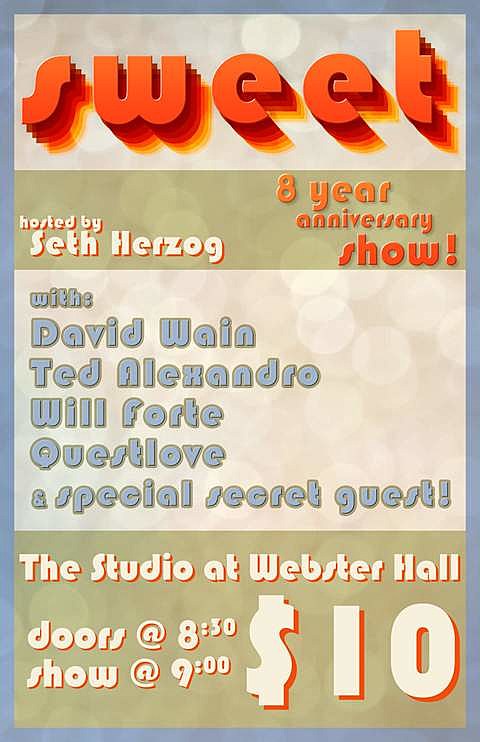 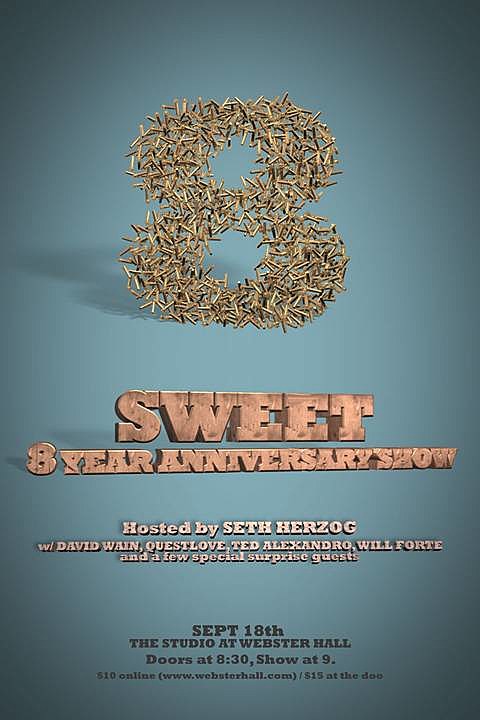