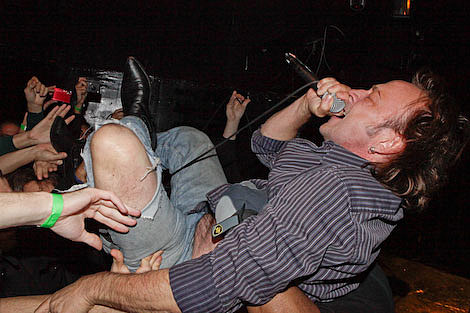 No offense to the enigmatic frontman of The Jesus Lizard, etc, but the first thought that comes to mind when thinking of the sweaty high-octane vocals of David Yow isn't fine art. Yet the great vocalist will showcase his fascinating work at "GLASS GAS MASK", his solo art show that opens at Fuse Gallery in NYC TONIGHT (8/24) with an opening reception at 7PM. The exhibition runs through September 21st. 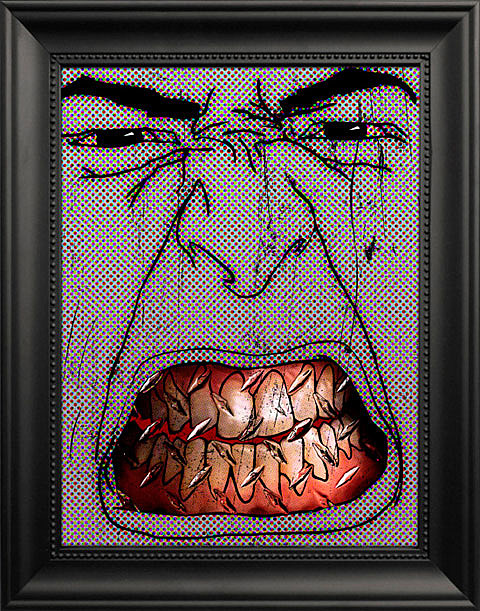 Working both digitally and by hand, artist and musician David Yow produces a body of work that has a keen compositional sensibility often combined with a dark sense of humor. He utilizes design elements of line, texture, and shape in conjunction with found images and objects to enhance, alter and create graphically bold imagery with an edge. In his digital works, Yow delineates images to exaggerate an emotion to absurdity; and in the paintings, he integrates acrylic, collage, charcoal, pencil, spit, hair, crayon, wood, etc. to craft a deviant somewhat biomorphic creation, that is, or was, living - whatever it is, is very difficult to discern.

While having an illustrious music career in the bands Scratch Acid and the Jesus Lizard, David Yow also has a long time passion for visual art. In his pre-punk college years, David completely submerged himself in painting and drawing, but music soon emerged as a form of creative expression he couldn't resist. He has recently returned to art-making. His work has been exhibited both nationally and internationally in Berlin, Los Angeles and New York.

Despite being previously featured in other exhibitions in the NYC area, tonight is Yow's first solo venture in our fair city. Preview some more of his work at his website.

In other David Yow news, we previously mentioned that Scratch Acid are getting back together to play ATP in Minehead this fall and other US dates TBA. Still no word on those.