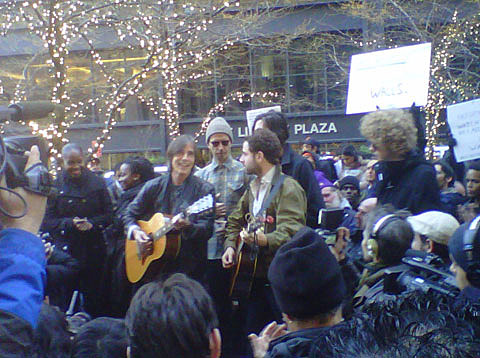 A picture from this afternoon's festivities above. A video from that, and a video of Dawes playing a recent AV Club Holiday Undercover session, below...

Vince Guaraldi's jazzy holiday ballad "Christmas Time Is Here" might initially seem like an odd choice for the L.A. folk-band Dawes, but the guys were looking to challenge themselves with some "weird chords" and such. The original version will be instantly familiar to those who make viewings of A Charlie Brown Christmas an annual tradition. (Fans of Arrested Development will probably recognize the song as George Michael Bluth's "sad" music.) It's one of the prettiest of all holiday standards, and Dawes took the song head on, with a cover that's faithful to Guaraldi's theme and its tear-jerking emotional core. [AV Club]

AND today in NYC: