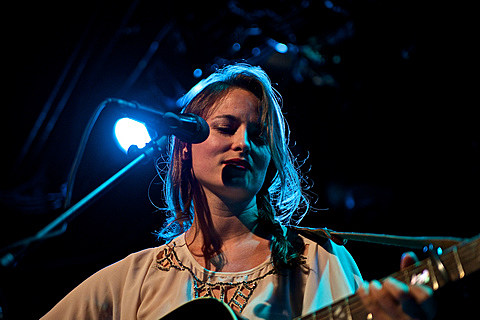 Dawn Landes has a lot going on these days. She put out a full-length, Bluebird, back in February via Western Vinyl, and now she's raising money on PledgeMusic for a tour and a covers EP. If you pledge, you can get the usual merch goodies that come with these things, but also stuff like a set of polaroids taken by Dawn herself, the chance to introduce her onstage, or a phone conversation. For the big spenders, there are also options like hosting a house concert, getting to keep Dawn's guitar, or getting a song produced by her in the studio. As of this post, she's already 87% of the way to her goal with 22 days to go.

On top of that TBA tour, she'll be playing NYC at Rough Trade on August 16 with Bobby Long, and opening for Brian Ferry on three of the dates of his East Coast tour, including his NYC show at the Beacon Theatre on October 1. Tickets for the Rough Trade show are on sale now and a few resale tickets (same link) for the Bryan Ferry show are available.

All dates are listed, with a stream of her new album, below...