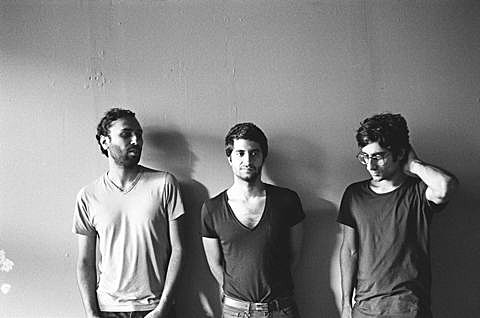 Dawn of Midi makes electronic sounding acoustic music or, as the New York Times recently put it, "something like minimal dance music using piano, acoustic bass and a drum kit with a high-hat but no other cymbals." The NYC-based trio of Qasim Naqvi (drums), Amino Belyamani (piano) and Aakaash Israni (bass) touches on the rhythmic waves of Steve Reich, steady pulse of krautrock and interlocked improvisation that might remind you of a jazz ensemble.

The band has played diverse Village venue Le Poisson Rouge a few times over the past few months and LPR has the band booked once again, this time at the night they're curating at the Brooklyn Night Bazaar on November 29. A Place to Bury Strangers, Pontiak, and Woodsman join them on the bill. That show is free. You can also see Dawn of Midi at Winter Jazz Fest in January and Ecstatic Music Festival on February 1 with Bright Wave .

You can listen to this year's Dysnomia, which came out in August, and watch a video of Dawn of Midi opening for Junip at LPR in October, and more, below...

DAWN OF MIDI - DYSNOMIA from Dawn of Midi on Vimeo.