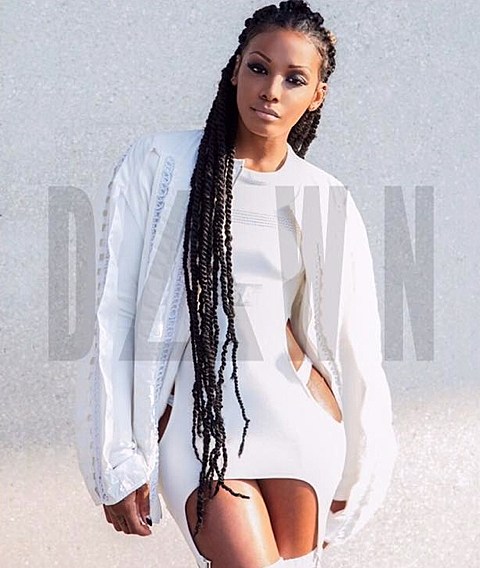 Earlier this year, Dawn Richard released the genre-defying album, Blackheart, which was part art pop and part R&B, without ever strictly adhering to either. Since then, she changed her moniker to D∆WN and dropped the one-off single "Running From Sane" for Adult Swim which is even weirder than anything on the album (listen below). Going by that song, it seems like her work is only going to get more interesting, and this new interview with FADER suggests the same thing. She talks about working with Fade To Mind producer Kingdom, who has previously collaborated with the similarly forward-thinking R&B singer Kelela:

I was talking with Jacky, who works with Opening Ceremony, and I was like, "you gotta figure out how to get me in with Fade To Mind, because I think they're fucking amazing." A year later, I randomly see Ezra [Kingdom] and I'm like "Yo, we should do something, let me get in a studio with y'all!" The first day [in a studio], we did five songs. The rest is history. We did the PAMM Institute thing together, and we're going to do MoMA together as well. That's been the relationship ever since, we make sense. I think the way Fade To Mind works is brilliant. It's organic, they only do it if it feels good, they don't push it. And in the last few years, I've really been in that place where if it's organic then I'll do it, if it doesn't feel good I won't do it. I think that's why we work so well.

Dawn says the Kingdom collaborations should hopefully appear on her next album, RedHeart (the conclusion to her trilogy which also includes 2013's GoldenHeart). She also talks about some dream collaborations:

I'm really, really in love with artists like Girlpool. With Arca. With SOHN. I wouldn't even want to do anything other than just sit in the studio and smoke and listen to shit. I just think they're innovative. Girlpool reminds me of the old girl bands who had the two part harmonies, and they were--not angry, but their voices just have so much in them they barely need anything else. Because everything is so processed these days, with vocals, it feels good to hear something so raw.

Both Dawn and Kingdom are on this weekend's installment of Warm Up at MoMA PS1 (8/29). It also features Matias Aguayo, DJ Windows 98 (aka Arcade Fire's Win Butler), Murlo and False Witness. Tickets are still available. It's the second to last Warm Up of 2015, but the lineup for the final one (9/5) is still TBA.

Listen to "Running From Sane" below...