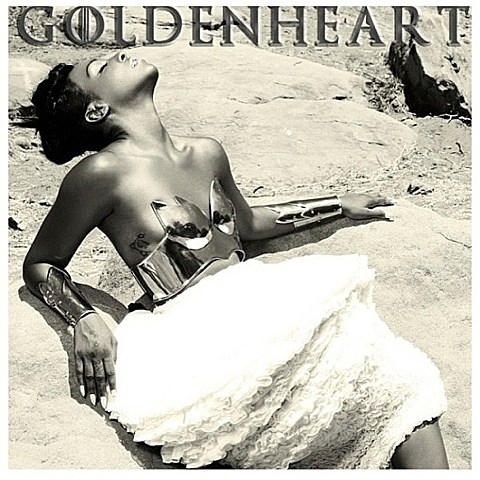 R&B singer Dawn Richard was formerly a member of the mid-2000s Bad Boy Records-signed all-female group Danity Kane, after which she joined Diddy Dirty Money and then began a solo career in 2011 which led to 2012's Armor On, one of the most overlooked but great EPs of last year. The EP harnessed dark multi-layered production that pulled from Afro-centric polyrhythms, minimal late night sensuality, and radio appeal, and showed Dawn growing as an increasingly versatile singer. If you haven't yet, you can watch the video for EP track, "Bombs," below.

Dawn followed that EP last month (December) with the Whiteout EP and is now set to release a full length, GoldenHeart on January 15. Dawn just revealed snippets from the new album and you can stream those and check out the tracklist below. That's the cover art above. The album features production from Druski (who worked on Armor On), Fisticuffs (who worked with Miguel on his great Kaleidoscope Dream), and Denote. You can pre-order it now.

Dawn has a few dates scheduled (and is promising more) including one in NYC two days after the album release, January 17 at SOB's with Bridget Kelly and Aaron Camper. Tickets for that show are on sale now.

A list of all dates, snippets and tracklist from the new album, and the video for "Bombs," below...