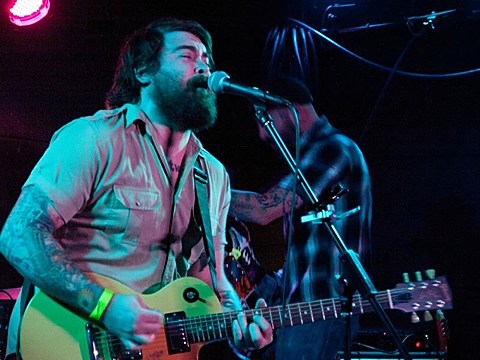 On DC band Typefighter's earlier material, they were making the kinda folky, kinda emo stuff that bands like Bright Eyes or Death Cab for Cutie started out doing, but on "Much," the first single from their upcoming full length, The End of Everything (due out in 2014), only few traces of their early sound are to be found. Here they're doing the kind of edgy power pop we've gotten from Weezer, Jimmy Eat World, and The Jealous Sound with busy guitar noodling meeting sugary power chords and anthemic "HEEEEEEY"s. (Or maybe he's saying "here," but either way, if you like those bands I mentioned, you should check this out.)

The band just made a video for "Much," and if the song itself isn't nostalgic enough, it features a little kid gathering his friends for a war in the woods against another group of little kids that may remind you of similar playground battles from your own youth. And spoiler alert: there's an underlying love story. The video makes its premiere in this post, and you can watch it below.

Typefighter have a few shows coming up, including one in NYC on November 8 at Grand Victory with Sunset Guns, the Titus Andronicus-related Heeney, and Black Mountain Revival.

Much from Typefighter on Vimeo.