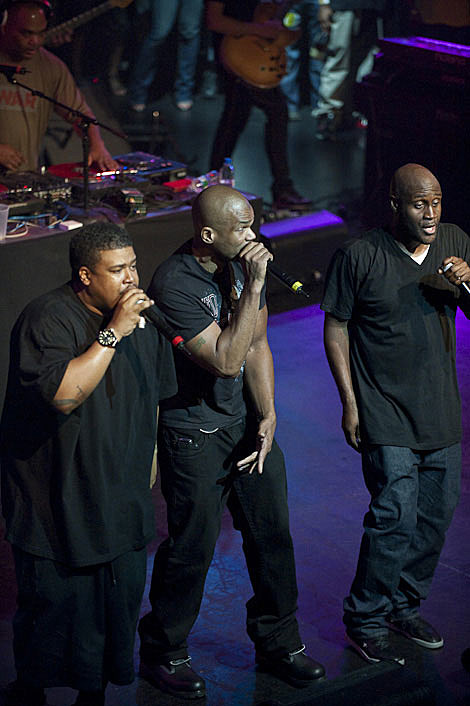 As Del La Soul told the crowd when they took the stage at Nokia Theatre in NYC last night (8/13), their show was not going to be all music from 3 Feet High & Rising. Why would anyone think it would be? Probably because the show was billed as "20 Years High and Rising" (and everyone and their mother is playing full albums these days) (including Buckshot who opened the show, but didn't play a full album at this one either). I was more than okay with them not playing the full thing, though it would have been nice to hear a few more songs from that album. Specifically, I wished they played "The Magic Number" and "Jenifa Taught Me (Derwin's Revenge)".

I loved every second of the packed show, and the 10-piece backing band was an especially nice touch. That said, I was selfishly hoping for a few more special guests, not that there weren't any. I thought for sure that Q-Tip would show up, and the Jungle Brothers and Black Sheep, and maybe even Doom, and who knows who else. Ends up they sort of kept the guests to a minimum. Bumpy Knuckles performed a short unannounced opening set. Prince Paul was brought out for a second to say hello. Dres from Black Sheep and Ali Shaheed Muhammad from A Tribe Called Quest were watching from the side of the stage and were brought forward to dance for a minute during "Buddy". And then, the big, and maybe only real special guest moment came during a cover of Run DMC's "Rock Box" which was completed with DMC himself on stage as part of the group. They covered Rakim too, but he wasn't there, maybe because he was downtown playing his own show at Highline Ballroom the same evening.

This Sunday (8/16) indie rock leaves the Williamsburg Waterfront for one week (Central Park Summerstage stole it for the day), and another big (mostly) hip hop show happens in NYC, courtesy of JellyNYC, and it's free (and/or $50). The Sunday Pool Party lineup includes Gravy Train!!!, DD/MM/YYYY, Kenan Bell (who also opened for De La Soul on Thursday), a DJ set by Prince Paul (Plug Four), and a headlining set by DEL the Funky Homosapien.

We have a full set of pictures coming from De La Soul (more tour dates HERE), and we'll have some from Sunday too. In the meantime, here's a few videos from the show...

"Me Myself and I"