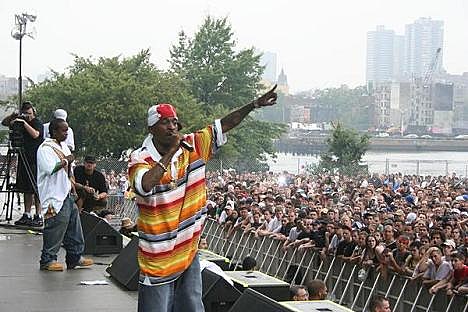 Time Out New York: You were 19 years old when you made 3 Feet High--and seemed so unself-conscious about the sorts of things teenage boys are normally self conscious about. Rapping about talking fish in "Tread Water," for example...

De La Soul's Posdnuos: Well, I think we were independent... we just had our own way of thinking about things and dressing. And like I said, people around you sort of gravitate toward you because you find yourself thinking the same, trying the same things. So I mean we all love what Run-D.M.C. did or was still doing, or Rakim or all the rappers at the time.... But we just knew that we just naturally had to come up with what we wanted to. We weren't gonna copy or bite what someone else was doing.

If this was a boxing match, I'd call it a split decision. Tonight (8/13) a pair of heavyweights in the old school realm face off for most-kick-ass-hip-hop-show-of-the-night. In this corner... weighing in at a considerable twenty years in the game... the De La Soul tour honoring Three Feet High And Rising! Make sure to get to Nokia Theatre early to catch the one and only Buckshot Shorty of Black Moon who is opening the show (he played Brower Park just a few days ago with Smif N Wessun).

In the OTHER corner.... the ORIGINAL God MC who will also appear tonight 8/13), but at Highline Ballroom (not Jay-HOVA)... Rakim! We have THREE pairs of tickets to this show. Wu-Tang's U-God opens. Wanna go? The first three folks to email us at BVCONTESTS@HOTMAIL.COM with a subject line of "Rakim Allah" get 'em!

And another hip hop great will be at Nokia Theater in the coming weeks, Q-Tip, who will appear in celebration of Michael Jackson's b-day (but as a DJ).