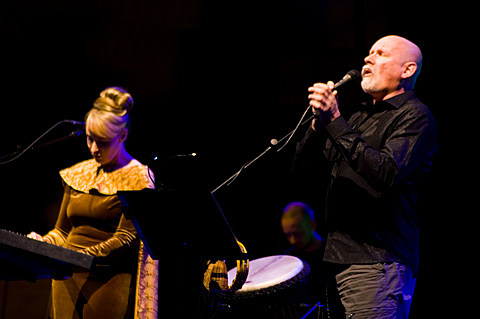 Dead Can Dance's tour slithers into NYC this week, stopping at Beacon Theatre on Wednesday (8/29) and Thursday (8/30) and tickets are still available to both shows. If you'd like to go for free, we're giving a pair of tickets away to each show. Details on how to enter are below.

The duo of Lisa Gerrard and Brendan Perry just released, Anastasis, DCD's first new album in 15 years (stream it here) and the tour has been making its way across the country this summer. Here's an excerpt of a review from their Berkeley, CA show:

Dead Can Dance didn't have to do much to get a standing ovation tonight. In fact, Lisa Gerrard, Brendan Perry, and the hired help got their first ovation simply for showing up, with the surprisingly chatty and vocally rambunctious audience rising wildly to its feet before the band even finished taking the stage. Two hours and three encores later, so much love had been directed towards Gerrard and Perry -- who release Anastasis, their first new Dead Can Dance album in over 15 years, on Tuesday -- that they almost seemed embarrassed. - [SF Guardian]

You can check out the setlist from the San Francisco show below. BV Chicago was at Dead Can Dance's show in that city and you can check out photos and setlist here. Tonight (8/27), the band will be in the DC area, playing Wolftrap Farm in Vienna. All Dead Can Dance tour dates are at the bottom of this post.

======================
For a chance at winning a pair of tickets to see DEAD CAN DANCE AT BEACON THEATRE: either tweet something that includes both @BrooklynVegan AND "DEAD CAN DANCE" in the tweet, or send an email to BVCONTESTS@HOTMAIL.COM with the subject line "DEAD CAN DANCE." Please also include which night you would like to go to -- Tues 8/28 or Wed 8/29 -- and also your first and last name in the email. We'll pick a winner at random for each night and contact them with more details. If you enter by email, it will not be shared with anyone else. Good luck!
======================