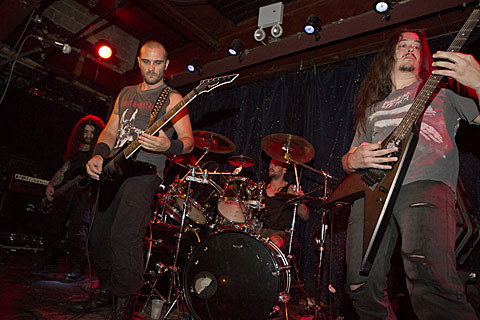 Filthy old-school death metallers Dead Congregation will be heading to the US come October. The Greek beasts are hitting the road in support of their Profound Lore-released sophomore album Promulgation of the Fall, which made the rounds to acclaim in May. They'll be joined by Pissgrave and Mausoleum. You can see the currently announced dates -- including their Euro stops after the States are done -- below.

Dead Congregation's road-trip happens to coincide with Svart Crown's trek across America. The French blackened death blasters are set to rip things up on an all-star lineup with Belphegor, Rotting Christ, and Beheaded. Austria's Belphegor just released Conjuring the Dead at the beginning of this month. Greece's Rotting Christ continued to diversify their symphonic experiments with 2013's Κατά τον δαίμονα εαυτού. And Beheaded have blazed a trail as one of Malta's premier blast n' slam purveyors. The four-headed monster of metal will pass through cities such as Chicago, Seattle, and San Francisco. On September 24, they'll drop in to NYC's Gramercy Theatre. Tickets are available now. The full tour appears below.

So, here's your foreshadowing pay-off: Svart Crown are sticking around America for a little longer once their first engagement is done. When Dead Congregation, Pissgrave, and Mausoleum make their way to NYC's Saint Vitus on October 20 with a Signature Riff presented show, they'll be joined by Svart Crown and Chicago's Immortal Bird, who are still riding high on last year's Akrasia. Tickets for that blowout are available now.

All dates for both tours are listed, along with all of the streams you can handle, below.