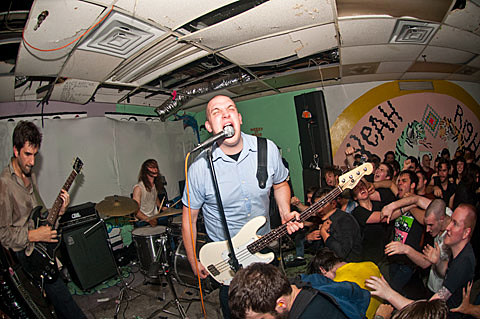 Australian garage rockers Dead Farmers and Vancouver's Sex Church are currently looping the US on their own tours, but will cross paths at Shea Stadium on Saturday (10/29) for a show with Pop.1280, The Men, and Unholy Two. The show blasts off at 9PM, and more details are at the Facebook event page. Sex Church, who is touring in support of Growing Over out now on LOAD Records (stream "Dull Light" below), will ALSO play Death By Audio the next night (10/30), teaming with K-Holes, Call of the Wild (mem Awesome Color) and Pygmy Shrews. Tour dates are below.

Besides Saturday's show at Shea Stadium, The Men also has a few other dates in their near future that include supporting Screaming Females at 285 Kent on 11/5 and supporting Russian Circles/Deafheaven at both Bowery Ballroom and Maxwells' on 11/14 (tickets) and 11/15 (tickets).

Besides that, although the body still isn't cold on their latest LP Leave Home, The Men have already crafted their follow-up, which will see the light of day in March via Sacred Bones. Details on that are forthcoming.

Pop 1280 are returning from a stint of dates with Unholy Two at the Shea Stadium show. The band recently dropped the Thirteen Steps 7" via Blind Prophet Records (Sean from Cult of Youth's label), and you can stream that below alongside their full tour schedule and all others.