Thankfully, DMB does not stand for Dave Matthews Band 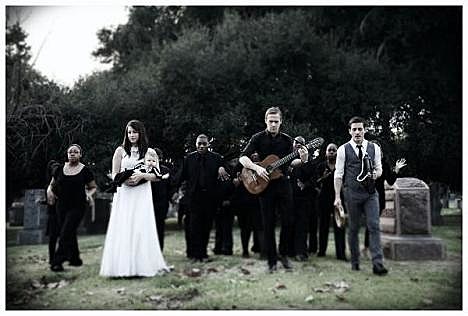 In Lars & The Real Girl, Ryan Gosling was in love with a lifesize (and anotomically correct!) sex doll. In Half Nelson, Gosling played a teacher that smoked crack to the sounds of Kevin Drew & co. In his latest role, Gosling will team up with fellow actor Zach Shields will do their best Bryan Ferry/Peter Murphy vibrato for a goth-y folk project entitled Dead Man's Bones.

Dead Man's Bones have a new self-titled LP due on Oct 6th via ANTI- and the band is hitting the road for a short US tour at the end of October, with NYC and Le Poisson Rouge on 10/15 in it's sights. Tickets are on sale.

The album, which was originally the soundtrack to a stage play about ghosts, zombies and werewolves, was completed with the help of a children's chorus. The band (Zach, Ryan, plus three other musicians) will be re-creating the songs with a local choir in every city. The band and choirs will be performing unique versions of their werewolf, zombie, and monster inspired love songs and tales. Reviving a ritual from a bygone era the band is organizing a talent show in each city in place of a traditional opening act (more info on this to be announced this coming week).

Dig on a pair of MP3s above, as well as a few vids and all of Dead Man's Bones' tour dates below...

Dead Man's Bones - "In The Room Where You Sleep" Live