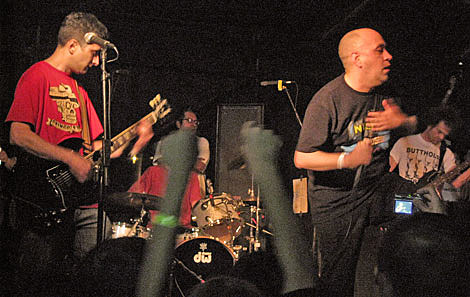 After Schulthise's death, the surviving Dead Milkmen took the stage once again for two consecutive nights in November 2004 at the Trocadero Theatre in Philadelphia. Proceeds were donated to a variety of mental health organizations and to a Serbian monastery that Schulthise supported. Dan Stevens, bass player of Genaro's band the Low Budgets, performed on bass.

In 2008, the band announced its plans to play the Fun Fun Fun Fest in Austin, TX, their first performance since the Schulthise memorial show, with Stevens again on bass. When asked if they were planning a corresponding tour, the band said they were not planning to do so. However, the band played two unannounced concerts in Philadelphia in October, 2008, billed under their pseudonym Les Enfants Du Prague. Both shows, including one at the small bar Johnny Brenda's and another at the all-ages venue the First Unitarian Church, sold out despite their lacking proper billing. [Wikipedia]

The band, with new bassist, did in fact play that show at Fun Fun Fun Fest last night (11/8). It was my first time seeing Dead Milkmen. I forgot I knew all the words. Full setlist and more pictures later. In the meantime here's some video....

(It sounded better live than it does in the video)

(note the Killdozer shoutout) (they played earlier in the day)