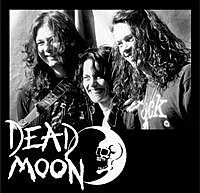 After 20 yrs, Dead Moon is retiring. It has been a journey we will always treasure and feel that a worldwide family has emerged in its place. Dead Moon became much bigger than the band itself, it became a DYI underground hopeful for a lot of people. The candle is still burning! --Fred Cole

Their other official website is still up though, and that lists the following tour dates:

By now you probably also heard that Canada's The Organ broke up too.

We are sad to announce that we're breaking up. We want to thank our friends, fans, and family for all the support you gave to us. Thank you. - Shelby, Jenny, Katie, Debora, and Shmoo.

The Organ announcement came right about the time we heard about Supersystem, not to mention Pamela Anderson and Kid Rock. Who's next?