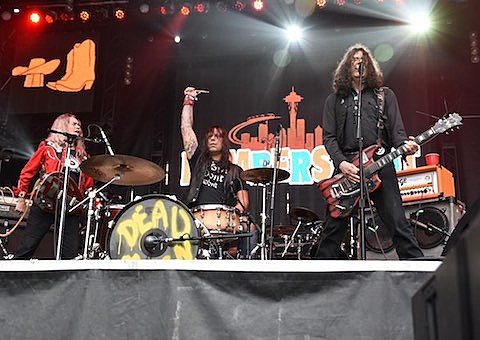 Fred Cole of Dead Moon collapsed due to a heart condition while on-stage during the band's performance at Seattle's Bumbershoot Festival over Labor Day weekend (Saturday, 9/5). The Stranger reports:

The group had burned through classic songs including "Walking on My Grave," "13 Going on 21," and "Goddamn I Hate The Blues" before Cole could not continue.

"He fully went down on all fours and had to brace himself, then a few stage hands came out and helped him off," said Eric Duffy, who witnessed the event from the crowd.

After Cole was escorted offstage, his wife and bandmate Toody Cole explained to the audience that Fred had undergone open heart surgery last year and had not been feeling well. She thanked the fans then said "now I have to go take care of my man."

just talked with the hospital & Fred is doing well, so they took him out of intensive care & up to a regular room. Couple more tests before they decide what needs to be done. Thanks for all your love & support.

Fred we're glad to hear you're feeling better and get well soon.

Dead Moon were in NYC back in June.