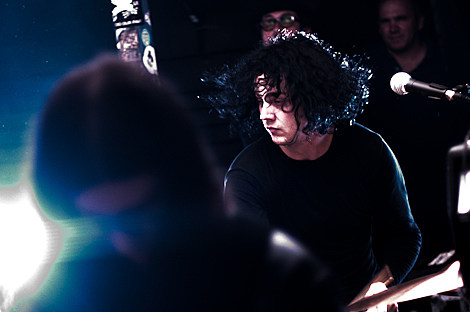 The Dead Weather will be performing at Music Hall of Williamsburg tonight (11/17) with an opening set by Ecstatic Peace-signed Australians Violent Soho. To go with that, some other Jack White news...

Jack White will be working with "Queen of Rockabilly" Wanda Jackson. The pairing sounds similar to what White did with Loretta Lynn for her 2004, Grammy-winning record Van Lear Rose, but Jackson says, "They had a super album, but he didn't have her do anything different, you know. She just did her little Loretta Lynn songs. But he told me he's gonna stretch me some, so we'll see." A 2009 Rock n Roll Hall of Fame nominee, Wanda recently performed at the Ponderosa Stomp in New Orleans.

One album White will not be helping with is the new record from Slash. On the nature of that, Slash said, "I wanted to get Jack White to sing on something, but he didn't want to sing. He said 'I'll play drums, I'll play guitar, but I don't wanna sing.'" Slash did manage to get "Dave Grohl, Alice Cooper, Ozzy Osbourne, Dave Grohl, Flea and three of former Guns N' Roses bandmates, Izzy Stradlin, Steven Adler and Duff McKagan" though.

Another project White has had a hand in putting out is composer John Boswell's remix of Carl Sagan's "Cosmos" series called "A Glorious Dawn." The song puts a beat under Sagan's auto-tuned narration and features a guest spot from Stephen Hawking. The track, on YouTube since September (below), is out now through White's Third Man Records.

The Dead Weather also just put out a record of their own, an unannounced EP called Live from Third Man West, which features five songs and four videos from their performance at a promotional pop-up store in Los Angeles in August (similar to what they did in New York in July). You can get it through iTunes.

The Dead Weather play Wednesday too (November 18th) at the mtvU Woodie Awards at Roseland Ballroom, and travel to New Zealand, Australia and Japan in March, 2010.

Tour dates and "A Glorious Dawn" are below...