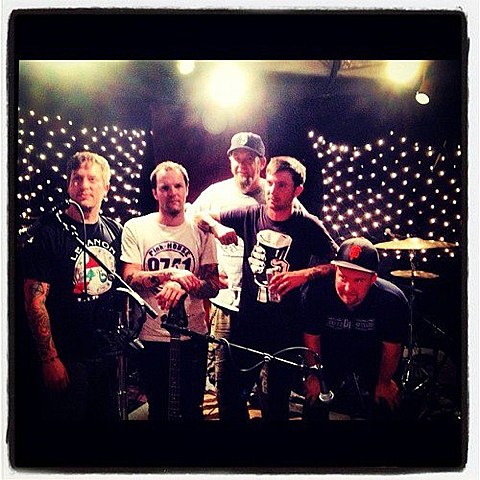 Like a lot of music fans who cut their teeth by listening to Black Flag albums, I've got a soft spot for rock'n'roll-inflected hardcore. The trouble is that most bands who play this style tend not to last very long. (Fucked Up, who have now lasted two years longer than the real Black Flag did, are a notable exception.)

Seattle's Deadkill will hopefully hang around for a while. Their debut LP, No, Never!, scratches that punk'n'roll itch -- they nail the barroom singalong/barroom fight vibe, and their songs are almost obsessively efficient. (Their press release quotes guitarist Michael Stubs saying: "Trim the fat. Are we getting to Point A to Point B as efficiently as we can? A lot of songs are so much more complicated than they should be.") No, Never! also benefits substantially from the work of Northwestern heavy-music engineer par excellence Matt Bayles (Botch, KEN mode, Mastodon, Pearl Jam), whose mix renders Deadkill in big, clear tones.

No, Never! comes out on January 21 via Good To Die Records, who also did last year's excellent Sandrider album. Stream "Ghost Out" from the album (and check out a couple of West Coast live dates) below...