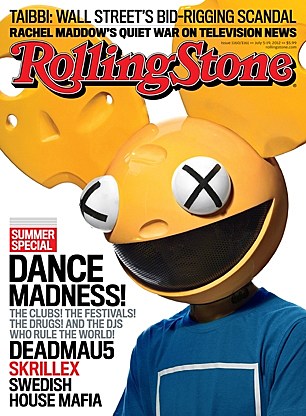 Due to reactions to something EDM DJ-producer, megastar Deadmau5 said in the new Rolling Stone (that he is on the cover of), Deadmau5 posted the following clarification to his Tumber:

we all hit play.

its no secret. when it comes to "live" performance of EDM... that's about the most it seems you can do anyway. It's not about performance art, its not about talent either (really its not) In fact, let me do you and the rest of the EDM world button pushers who fuckin hate me for telling you how it is, a favor and let you all know how it is.

I think given about 1 hour of instruction, anyone with minimal knowledge of ableton and music tech in general could DO what im doing at a deadmau5 concert. Just like i think ANY DJ in the WORLD who can match a beat can do what "ANYONE else" (not going to mention any names) is doing on their EDM stages too. have a look, then let me explain:

okay, so heres me, in a big silly mousehead.. twiddlin a knob or somethin... okay so heres how it works.... Somewhere in that mess is a computer, running ableton live... and its spewing out premixed (to a degree) stems of my original producitons, and then a SMPTE feed to front of house (so tell the light / video systems) where im at in the performance... so that all the visuals line up nicely and all the light cues are on and stuff. Now, while thats all goin on... theres a good chunk of Midi data spitting out as well to a handful of synths and crap that are / were used in the actual produciton... which i can tweak *live* and whatnot... but doesnt give me alot of "lookit me im jimi hendrix check out this solo" stuff, because im constrained to work on a set timeline because of the SMPTE. Its a super redundant system, and more importantly its reliable as FUCK! And obviously, ive done the show a couple hundred times easily by now, so the focus over the past few runs with the "cube show" has been more revolved around adding new audio / visual content to keep it current.

so thats my "live" show. and thats as "live" as i can comfortably get it (for now anyway) of course itll evolve, and change up, but im sure a few key principles will always remain the same.

Im just so sick of hearing the "NO!!! IM NOT JUST DOING THIS, I HAVE 6 TABLES UP THERE AND I DO THIS THIS AND THIS" like... honestly. who gives a fuck? i dont have any shame in admitting that for "unhooked" sets.. i just roll up with a laptop and a midi controller and "select" tracks n hit a spacebar. ableton syncs the shit up for me... so no beatmatching skill required. "beatmatching" isnt even a fucking skill as far as im concered anyway. so what, you can count to 4. cool. i had that skill down when i was 3, so dont give me that argument please.

my "skills" and other PRODUCERS skills shine where it needs to shine... in the goddamned studio, and on the fucking releases. thats what counts... because this whole big "edm" is taking over fad, im not going to let it go thinking that people assume theres a guy on a laptop up there producing new original tracks on the fly. becausje none of the "top dj's in the world" to my knowledge have. myself included.
you know what makes the EDM show the crazy amazing show that it is? you guys do, the fans, the people who came to appreciate the music, the lights, all the other people who came, we just facilitate the means and the pretty lights and the draw of more awesome people like you by our studio productions. which is exactly what it is. But to stand up and say youre doing something special outside of a studio environment, when youre not, just plain fuckin annoys me.