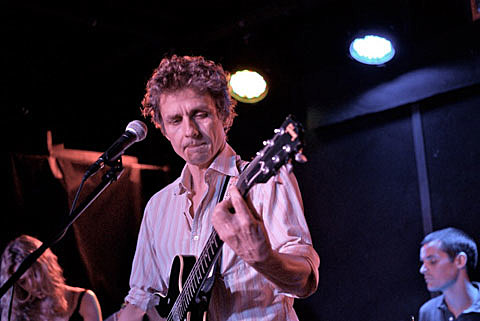 Damon & Naomi will take the stage of Knitting Factory TONIGHT (10/29) with Magik Markers, supporting Masaki Batoh of Ghost. The show is not the first time that members of Ghost and 2/3 of Galaxie 500 have shared the same stage, and based on their recorded/live history, it most likely will not be the last (especially since they are both scheduled to play Northampton, MA one day later). All dates below.

Damon & Naomi, both ex-Galaxie 500, meanwhile have not been participating in the "Dean plays Galaxie 500" shows that their ex-bandmate Dean Wareham has been doing, like at Bowery Ballroom on 10/22 during CMJ:

"Headliner Dean Wareham sat poised to play an exclusive set of music from the Galaxie 500 catalogue, encircling the 90's dream-pop band's fans with memories and treating them to a set of classics like "4th of July", "Flowers", "Blue Thunder" and "When Will You Come Home". Sans original band mates, Wareham invited bassist Britta Phillips (Luna, Dean & Britta), drummer Jason Lawrence (Dean & Britta) and guitarist Matt Sumrow (HeaveN) to play with him for the sold-out stint, which was as warm, subtle and pretty as the band's music".-[Sonic Diet]

The Bowery show was one of three shows on 10/22 for Dean & Britta , who brought said project to Bowery Electric as the surprise guest for the Village Voice/Red Eye day show in addition to their previously discussed performance "13 Most Beautiful...Songs for Andy Warhol's Screen Tests" at NYU's Skirball Center. Crushable was there:

"In a Q&A after the show, Dean and Britta explained that with hundreds of tests to choose from they wanted to compose for people who were part of Warhol's daily life -- and not folks who merely stopped in at the Factory once or twice (this is why we don't get any score for Bob Dylan's test, grr). Among the 13 compositions are videos for Billy Name, Lou Reed, Edie Sedgwick, Paul America and Nico.

The songs are dense and beautiful, some have lyrics and some are purely instrumental. It was fascinating to see both product and inspiration at the same time. There was something so raw and almost intrusive about the experience, and I imagine that's just how Andy Warhol would have wanted it."

If you missed Dean Wareham "plays Galaxie 500" at the Bowery show, no worries. He'll be back in NYC to presumably play the same set (or similar) at Music Hall of Williamsburg on 12/17. Tickets are still available.